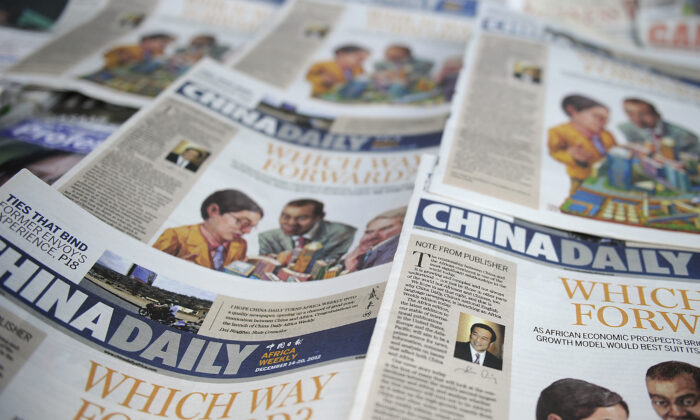 Copies of the Africa edition of the China Daily newspaper sits on a newsstand in the Kenyan capital Nairobi on Dec. 14, 2012. (Tony Karumba/AFP via Getty Images)
Analysis

The U.S. Department of State has announced that it will force anyone working as journalists for Chinese state media in the United States to reveal their identities to authorities and will also force state-run Chinese news outlets to reveal their real estate holdings.

These measures could help the U.S. government get a stronger grasp on how deeply the Chinese regime’s disinformation arms have penetrated the U.S. media landscape.

This new requirement will place the Chinese regime’s main state-run news outlets under the Office of Foreign Missions designation, which will identify them to the State Department as official foreign missions.

That’s notably different from a FARA, or the “Foreign Agents Registration Act,” designation. Rather than just making them register as foreign agents, the action will instead designate the outlets and their employees as official arms of the Chinese state.

The move was revealed during a State Department press briefing on Feb. 18 and was given on background by two department officials.

The reasoning for this move was simple.

“Each one of these entities meets the definition of foreign mission under our Foreign Mission Act, which is to say they are either substantially owned or effectively controlled by a foreign government,” one of the unidentified department officials explained.

The official added, “We think it’s altogether appropriate that we basically call these entities what they are, which are organs of the Chinese one-party-state propaganda apparatus.”

Taken in its broader context, the timing of this move is significant. It comes less than two weeks after a group of 35 Republican lawmakers—including Sen. Tom Cotton (R-Ark.), Rep. Jim Banks (R-Ohio), and Sen. Ted Cruz (R-Texas)—wrote a Feb. 6 open letter to Attorney General William Barr requesting that the Department of Justice investigate China Daily for “repeated violations of the Foreign Agents Registration Act (FARA).”

They stated: “The Chinese Communist Party committed $6.6 billion to foreign propaganda efforts in 2009, and according to FARA receipts, has spent over $35 million on China Daily alone since 2017. China’s massive financial commitment speaks to the seriousness of their effort to sway foreign sentiment.”

More significantly, they note, “China Daily has paid over 30 independent newspapers to host four- to eight-page ‘China Watch’ inserts.” Meanwhile, the lawmakers say that China Daily has violated its FARA designation by not providing the required information to the Department of Justice about these inserts, including which outlets run them and how much money U.S. news outlets are paid to run them.

China Daily is owned by the Publicity Department of the Chinese Communist Party, and the request for investigation into it states that while some articles in its China Watch inserts in major U.S. publications appear harmless, others “serve as cover for China’s atrocities, including its crimes against humanity against Uyghurs in the Xinjiang region and its support for the crackdown in Hong Kong.”

The lawmakers point out that, bolstered by the recent designation of China Daily and other outlets as foreign missions, the Chinese regime has placed heavy importance on controlling foreign perceptions. That’s included taking strong censorship actions.

Last year’s “NBA boycott and the arson of The Epoch Times headquarters in Hong Kong show the lengths China will go to protect its international image. And China’s financial commitment to foreign propaganda outlets is the proof in the pudding. Propaganda that seeks to obfuscate communist atrocities deserves to be counteracted. But the United States has been puzzlingly slow to respond,” the open letter states.

It’s unclear how the foreign mission designation will affect news outlets that have accepted cash from state-run news outlets, including China Daily, but its requirement that the outlets reveal their real estate holdings and information about their employees can help lift the veil from their operations.

It also will mean that U.S. news outlets that continue their relationships with Chinese state media will be officially accepting money from a foreign government to publicize propaganda and disinformation.

Joshua Philipp is a senior investigative reporter with The Epoch Times.