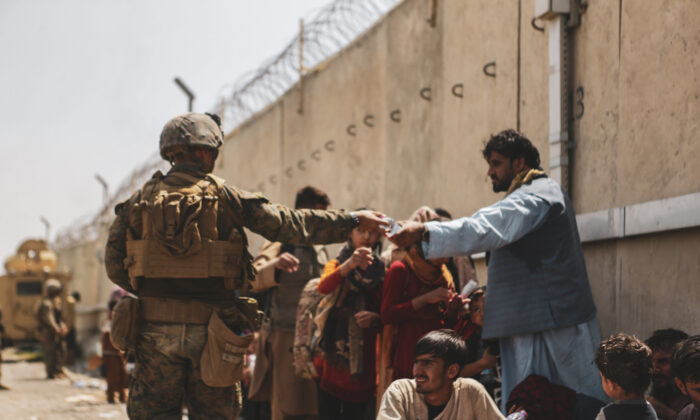 A Marine with the 24th Marine Expeditionary Unit passes out water to Afghan evacuees at Hamid Karzai International Airport in Kabul, Afghanistan on Aug. 22, 2021. (Sgt. Isaiah Campbell/U.S. Marine Corps via Getty Images)
US

The State Department asked a federal judge to vacate a court order to streamline its special immigrant visa (SIV) application process, citing chaos in Afghanistan as the reason for being unable to process a growing backlog of applicants.

Afghan and Iraqi Allies—five anonymous Iraqi or Afghan nationals who led the class-action lawsuit—won a judgment in 2019, when a federal judge ordered the State Department to streamline the SIV process. State Department attorneys said on May 24 they are doing their best to comply with the 2019 court order, but that the U.S. military’s withdrawal from Afghanistan complicated matters.

“The circumstances that gave rise to this case have changed dramatically since the court issued its orders finding unreasonable delay and adopting an adjudication plan for the processing of SIVs. The centerpiece of that plan for Afghan SIV applicants was an immigrant visa interview of the Afghan national principal applicant and their derivatives at the U.S. Embassy in Kabul,” the State Department said.

“Since the Court last addressed substantive issues in this case, the Taliban seized control of Afghanistan and the United States suspended operations at its embassy in Kabul, rendering it impossible to provide visa services in Afghanistan.”

The State Department explained that Afghans must travel outside the country to apply for an SIV.

“Defendants are now largely dependent on each applicant’s ability and resources to travel outside of Afghanistan to complete their visa application interviews at another U.S. Embassy or consular post.”

According to the State Department, its new SIV cases quadrupled to 25,903—roughly 5,180 a month—between Sept. 1, 2021, and Dec. 31, 2021. The State Department said it has received more email inquiries about SIV applications since last August than it did in the five previous years combined.

Despite these complicating factors, the State Department said it has reduced the total average processing time for an Afghan SIV application to 587 days—down from the multiyear process it took in 2019.

“These reductions in processing times are particularly impressive given the new and massive demands on the Afghan SIV program since August 2021,” the State Department said.

“In the face of continuing mismanagement and persistent delays, and at a time of waning public attention, the Biden administration is trying to get out of its court-ordered obligations to promptly process the applications of thousands of Afghan and Iraqi SIV applicants who are still waiting for their safe passage to the United States,” Katie Austin, a senior attorney with the International Refugees Assistance Project, wrote in a written statement.

“The U.S. obligation to those who assisted U.S. efforts in Afghanistan and Iraq, written into law by Congress with strong bipartisan support, has not changed. Nor has the need for an efficient pathway to safety diminished in the aftermath of the U.S. involvement in Iraq and Afghanistan,” Austin said. “There must be more accountability—not less—to ensure that the United States lives up to the promises that it made to those it left behind.”

According to the interpreter, her sister isn’t eligible for SIV status because she didn’t work on behalf of the U.S. government—instead falling into the “F4” category of family-sponsored visa application process. The State Department limits the number of such annual applicants based on criteria explained in the Immigration and Nationality Act.

“They’re telling me she falls in category 4 because I’m her sister. It’s a 14-year waitlist,” the interpreter said in March. “I’m privately sponsoring her, too, taking full responsibility for her financially. Others will get all the taxpayer benefits.

“I am just heartbroken.”

A State Department spokesperson told The Epoch Times in March that delays with visa applications are “not specific to Afghanistan.”