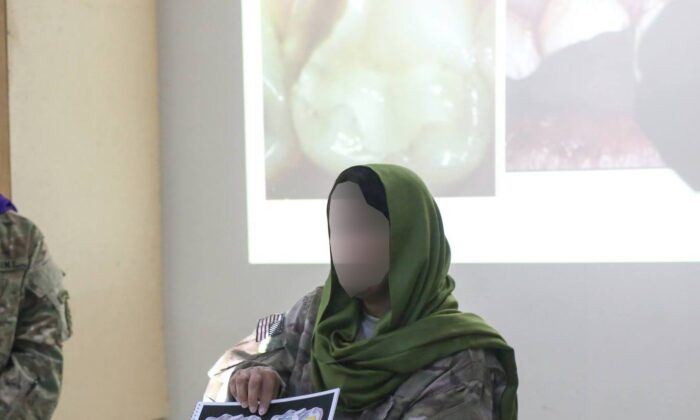 It could take 14 years for the State Department to process the visa application of a former U.S.–Afghan interpreter’s sister who’s stranded in Kabul, Afghanistan, according to the former interpreter.

With the Taliban still seeking revenge against those who worked with the U.S. government, she fears that her sister may not have that long.

The Epoch Times is withholding the names of the interpreter and her sister to protect the latter’s identity from the Taliban. Her sister already has had to change locations once in Kabul after a local U.S. television station aired images of her in September 2021, the interpreter said.

The interpreter was interviewed by The Epoch Times in September 2021, after narrowly escaping Afghanistan during the U.S. military’s chaotic late-August withdrawal. As the interpreter explained at the time, her sister wasn’t as lucky.

The two women were forced to wait for more than 48 hours in line outside of the Kabul airport, standing under the scorching sun with no food or water, sleeping amid garbage and feces, and dealing with the all-too-real threat of being trampled by throngs of would-be refugees.

There were times when the women passed out from exhaustion in each other’s arms. Finally, they made it to the gate, where the interpreter presented her U.S. passport to a U.S. Marine.

Instead of letting them through security, the Marine “told me to [expletive], go wait in the back of the line, and that he didn’t give a [expletive],” the interpreter told The Epoch Times in September 2021.

Since August 2021, the interpreter has continued to work to get her sister out of Kabul. However, the process has been frustratingly slow, she said.

“I have a rescue team that can do her evacuation, but the rules of the State Department say she needs a visa first,” she said. “Until then, she’s just going to have to wait.”

As a sibling, the interpreter’s sister falls into the “F4” category of the State Department’s family-sponsored visa application process. The State Department limits the number of such annual applicants based on criteria explained in the Immigration and Nationality Act.

According to the interpreter, her sister has been put at the bottom of the State Department’s list of priorities.

“They’re telling me she falls in category 4 because I’m her sister,” the interpreter said. “It’s a 14-year waitlist.”

With a 14-year wait being untenable, the interpreter switched to filing what she called a “humanitarian case” with the State Department. The U.S. government authorizes a parole on visa requirements “based on urgent humanitarian or significant public benefit reasons.”

“Basically, we’re starting all over again—not to mention, the Biden administration is not excepting any more parole cases,” the interpreter said, noting that humanitarian cases are also slow to process from Afghanistan because of the closure of the U.S. Embassy in Kabul.

The State Department declines to comment on individual cases, but provided the following statement: “The Department of State continues our efforts to facilitate the safe and orderly travel of U.S. citizens, Lawful Permanent Residents, and Afghan allies and their eligible family members who wish to leave Afghanistan. As we’ve said before, we will be relentless in this effort as we stand by our Afghan allies and their families.”

A State Department spokesperson also said any potential delays with visa applications are “not specific to Afghanistan.”

The interpreter said she isn’t alone in her struggles.

“I have a friend—a mother with children. Her husband worked with Americans. [The U.S. government] had to do an interview with his family, but there was no U.S. Embassy in Afghanistan,” the interpreter said. “I’m just one person among 100,000.”

According to the interpreter, her friend’s husband spent more than $5,000 to hire an attorney and cross into Pakistan, where he remains, awaiting word from the State Department.

“He’s still waiting to be processed, but doesn’t even have a case number,” the interpreter said.

The interpreter’s friend is one of the lucky ones with a passport. Those without documentation are being turned away at the Afghan–Pakistan border.

“The State Department is asking [refugees] to go somewhere else for interviews. But the Pakistanis want them to have passports, and the Taliban isn’t issuing passports,” she said.

The interpreter said her frustrations are compounded by the fact that other refugees and immigrants are pouring into the United States with no scrutiny from the government.

“I’m privately sponsoring her, too, taking full responsibility for her financially. Others will get all the taxpayer benefits,” she said. “I am just heartbroken.”