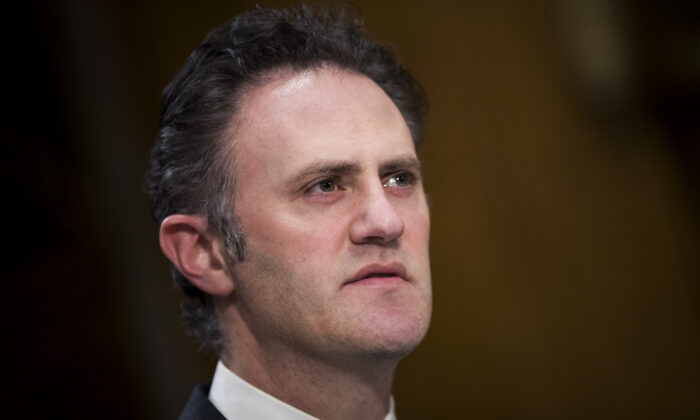 Nathan Sales, coordinator for counterterrorism at the U.S. Department of State, testifies during a Senate Foreign Relations Committee hearing concerning terrorism and radicalization in North Africa, on Capitol Hill in Washington on Dec. 6, 2017. (Drew Angerer/Getty Images)
US News

Iran is still the “world’s worst state sponsor of terrorism,” according to a new report published by the the U.S. Department of State on Nov. 1.

The Country Reports on Terrorism 2018 says Iran has spent nearly $1 billion annually to “support terrorist groups that serve as its proxies and expand its malign influence across the globe.”

It added that Iran “has also engaged in its own terrorist plotting around the world, particularly in Europe.”

“In January, German authorities investigated 10 suspected Islamic Revolutionary Guard Corps Qods Force operatives. In the summer, authorities in Belgium, France, and Germany thwarted an Iranian plot to bomb a political rally near Paris, France,” it said. “In October, an Iranian operative was arrested for planning an assassination in Denmark, and in December, Albania expelled two Iranian officials for plotting terrorist attacks.”

The report said that Tehran had continued to allow an Al-Qaeda “facilitation network to operate in Iran,” which they said sends fighters and money to conflict zones in countries such as Afghanistan and Syria.

Al Qaeda also continues to survive, despite the “sustained efforts” of the United States since the Sept. 11 attacks.

“Al Qaeda’s regional affiliates continue to expand their ranks, plot, and carry out attacks, as well as raise funds and inspire new recruits through social media and virtual technologies,” the State Department said.

Furthermore, in noted that ISIS’s global presence continued to evolve too, “with affiliates and networks conducting attacks in the Middle East, South and East Asia, and Africa.”

Read More
Chapter Fifteen: The Communist Roots of Terrorism (UPDATED)
The Muslim Brotherhood Is a Terrorist Organization With Socialist Roots

The report said that this was largely due to terrorist tactics and use of technology evolving throughout 2018.

“For example, the increased use of commercially available drones and encrypted communications, as well as low-tech vehicle and knife attacks, presented additional challenges for the international counterterrorism community. Moreover, terrorists remained intent on attacking civil aviation, though there were no successful such attacks in 2018”, it said.

Despite the terror groups’ evolving presence, the report highlighted that the United States has been met with success in its fight against terror during the year, noting that, “The United States and its partners made major strides to defeat and degrade international terrorist organizations in 2018.”

It explained: “Together, we liberated nearly all the territory ISIS previously held in Syria and Iraq, freeing 110,000 square kilometers and roughly 7.7 million men, women, and children from ISIS’s brutal rule.

“These successes set the stage for the final destruction of the so-called ‘caliphate’ in 2019.”

Announcing the report in a press conference at the White House on Nov. 1, Counterterrorism Coordinator Ambassador Nathan Sales also warned of the of rise in “racially-motivated” and “ethically motivated” terrorism.

Sales said: “We know that white supremacists and other racially motivated organizations or networks communicate across international borders.

The U.S. state report comes just one week after ISIS leader, Abu Bakr al-Baghdadi, killed himself during a raid by U.S. forces on compound in northern Syria.