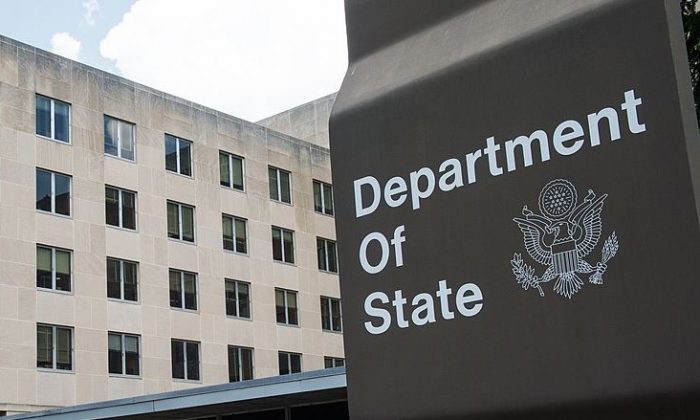 Department of State building in Washington on July 31, 2014. (Paul J. Richards/AFP/Getty Images)
US

WASHINGTON—A U.S. State Department employee with access to sensitive diplomatic information was accused of failing to report her contacts with Chinese foreign intelligence agents who provided her with gifts in exchange for economic information, federal prosecutors said on Wednesday.

A State Department spokeswoman had no immediate comment on the charges of obstruction of justice and making false statements to the Federal Bureau of Investigation filed against employee Candace Claiborne in federal court in Washington.

Claiborne was paid almost $2,500 by a Chinese agent in 2011 in exchange for information about U.S. economic policy in relation to China, according to court documents.

The charges against Claiborne were announced just ahead of an April 6-7 meeting between President Donald Trump and Chinese President Xi Jinping at a time of heightened tensions between the world’s two largest economies over North Korea, the South China Sea, Taiwan and trade. China was the object of heavy criticism by Trump during the 2016 presidential campaign.

Claiborne has worked at the State Department since 1999, during which she served in a number of overseas post including embassies and consulates in Iraq, Sudan and China.

The U.S. Department of Justice said Claiborne used her position and top security clearance to provide Chinese foreign intelligence agents with “sensitive diplomatic data” in exchange for the gifts.

A preliminary hearing for Claiborne was set for April 18.