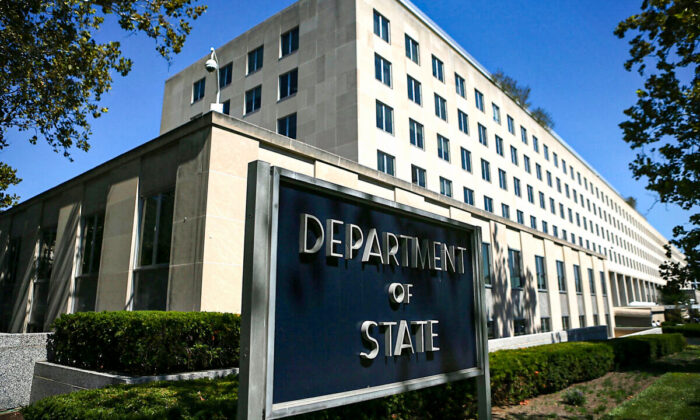 The U.S. State Department on Jan. 21 condemned the Chinese Communist Party (CCP) for sentencing 11 Falun Gong practitioners to prison terms of as long as eight years for exercising their religious beliefs.

The sentences were handed down on Jan. 14, just weeks ahead of the start of the Beijing Winter Olympics.

The State Department is calling on Beijing to “immediately end its depraved abuse and mistreatment of Falun Gong practitioners, release those imprisoned due to their beliefs, and address the whereabouts of missing practitioners,” a department official told The Epoch Times in an email.

“Since 1999, the Communist Party of China has sought to eradicate Falun Gong, a spiritual practice originating in China, and its peaceful practitioners and human rights defenders who have fought for their right to practice their beliefs,” the official said.

At the beginning of the regime’s persecution in 1999, an estimated 70 million to 100 million Chinese people were practicing Falun Gong—which is based on the tenets of truthfulness, compassion, and tolerance—and the Communist Party deemed its popularity a threat.

“Extensive evidence shows the PRC government continues to repress and abuse this community to this day,” the official said, citing reports of torture and the Beijing court’s heavy-handed sentencing.

Practitioners who are arrested often are held in detention without trial for extended periods of time, denied proper legal representation, and punished on spurious and fabricated charges.

In the case of the 11 practitioners, 15 months in detention passed before they got a hearing last October, and at least one lawyer lost his license for taking their case.

A Beijing court claimed that their crime was “sabotaging law and order,” both for exercising their spiritual beliefs and for sharing photos and information with The Epoch Times.

The 11 were detained in July 2020, after the regime discovered that, as citizen journalists, they had photographed the effects of the COVID-19 pandemic during the early stages and shared those images with The Epoch Times.

“The Chinese Communist Party is relentless in its campaign against religious minorities,” Sen. Rick Scott (R-Fla.) told The Epoch Times.

“This latest attack on Falun Gong members who were trying to provide information about the pandemic is only the latest evidence of their gross attacks and even more reason to cut ties and stop supporting this evil regime.”

The sentencing, weeks before the Feb. 4 opening of the Winter Games, is “a moment that calls for moral clarity,” said Rev. Johnnie Moore, a former commissioner for the U.S. Commission for International Religious Freedom.

”Let’s be crystal clear what’s happening here: The CCP is rounding up people right before the Olympic Games,” he told The Epoch Times. “Democrats and Republicans, and allies of the United States, need to draw their line in the sand. This also applies to all those businesses who’ve been waving their social justice flags: They now face a test.”

She has survived two prior imprisonments for her beliefs and suffered various forms of torture inflicted by police—including one method in which her legs were pulled apart to 180 degrees. Three inmates then sat on her legs and back and continually applied pressure to create excruciating pain.

Xu’s husband, folk musician Yu Zhou, died at the hands of the police in the run-up to the Beijing Summer Games 14 years ago.

Arrested during an “Olympic check” in January 2008, Yu died of torture two weeks after being taken into custody.

Levi Browde, executive director at the Falun Dafa Information Center, criticized how the “CCP has completely decimated this family.”

“This brazen sentence is handed down as a message to the world,” Browde told The Epoch Times. “Think about it: The CCP chose to sentence Xu at the most visible time possible—three weeks before the Olympics start as all eyes are trained on Beijing.

“It’s as if the CCP is intentionally flaunting to the world that it will imprison Falun Gong practitioners at will, and there’s no one to stop them. We can’t let that be true.”