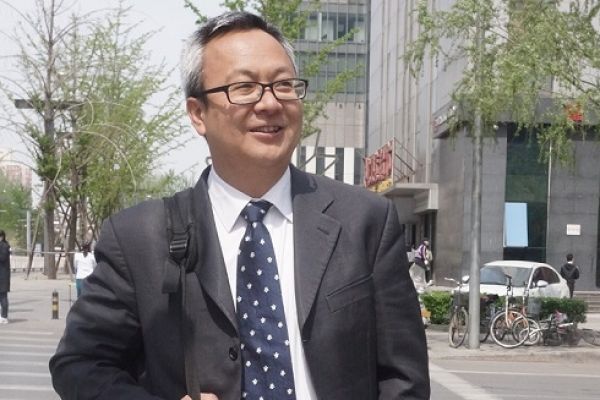 The Chinese regime revoked lawyer Liang Xiaojun’s lawyer license on Dec. 16 because he was defending Falun Gong practitioners, some of whom have been detained for their beliefs.

“You are the director of Beijing Daoheng Law Firm and a professional lawyer. But you publicly denied that Falun Gong is a cult, and kept on supporting Falun Gong,” the Beijing Judicial Bureau wrote on the revocation decision.

Falun Gong, also known as Falun Dafa, is a spiritual practice consisting of meditative exercises and moral teachings based on the principles of truthfulness, compassion, and tolerance. It grew in popularity during the 1990s, with 70 million to 100 million adherents in China by the end of the decade, according to estimates at the time.

Deeming this popularity a threat to its authoritarian control, the Chinese regime in 1999 launched a brutal persecution campaign in an attempt to eradicate the peaceful practice.

“I had contact with Falun Gong practitioners when I was in China. I could clearly feel that they became more responsible after practice. They pursue the truth,” Chen Guangcheng, a well-known Chinese human rights activist and lawyer in exile, told the Chinese edition of The Epoch Times on Dec. 15, the day after Liang’s license was revoked. “The Chinese Communist Party (CCP) designed the crime for lawyer Liang Xiaojun. It simply created a crime and used it to persecute a lawyer.”

“Neither the Ministry of Public Security, nor any other Chinese government organ released any document naming Falun Gong a cult. How come the Beijing Judicial Bureau had that definition?” Wu questioned.

“This revoke is a slap in the face of the so-called ‘rule of law’ in China under this communist regime,” Erping Zhang, spokesperson for the Falun Dafa Information Center in New York, told The Epoch Times on Dec. 20. “This communist regime is violating article 36 of China’s constitution, which states: ‘Citizens of the People’s Republic of China enjoy freedom of religious belief.’”

“We call upon the international community and people of conscience to speak up against the CCP’s human rights violations,” Zhang urged.

Liang obtained his Bachelor of Arts from Hebei Normal University in 1995, and Bachelor of Laws from China University of Political Science and Law in 2000. Since then, he has been a lawyer in Beijing.

In the past more than two decades, Liang represented countless people from vulnerable groups, prisoners of conscience, activists, and petitioners.

Before his license was revoked, Liang was defending Xu Na, a poet, painter, and Falun Gong practitioner in Beijing, and 10 of her fellow practitioners.

“Racing with the time! Tried to finish all things before my license is revoked,” Liang wrote on Twitter on Dec. 15. On that day, he went to the detention center to meet with Xu and update her about the upcoming revocation. “She [Xu] was worried about me, and kept on asking about my status,” Liang posted.

Liang was also defending Xu Zhiyong, a prominent Chinese activist and legal scholar who was detained because he kept on pursuing rule of law in China.

Liang once told a reporter from the New York Times in 2016 why he bravely defends dissidents. He said: “People’s rights are being trampled on. … I can’t ignore [this].”

“Beijing Public Legal Service Center refused to let me tenter the hearing in the beginning. We kept on telling the center that the constitution and law gave me the right to enter the hearing. [After about one hour] the center finally allowed me to enter,” Xie said.

On Dec. 14, Wang Yu, Yang Hui, and several other human rights lawyers went to the hearing to support Liang, but most of them weren’t allowed to enter the center. Wang said other lawyers and activists couldn’t even arrive because of the regime’s interference.

“Li Dawei from Tianshui city in northwestern Gansu Province was detained when he arrived at the train station. Several lawyers didn’t dare to come after they received the warning from the Beijing Judicial Bureau,” Wang said.

“All our lawyers are shocked [about Liang’s license being revoked]. [Liang] Xiaojun is a calm and gentle lawyer. The regime can’t even accommodate a lawyer like him! It shows the regime set up a more strict redline,” Yang told The Epoch Times.

Yang explained that Liang didn’t get emotional with Chinese judicial officials when facing injustice. He always tried to use Chinese laws and rules when he talked to officials. In other words, Liang respected the officials even when they didn’t behave in accordance with the laws.

Qiao Qi contributed to this report.