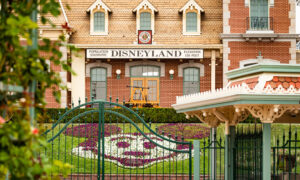 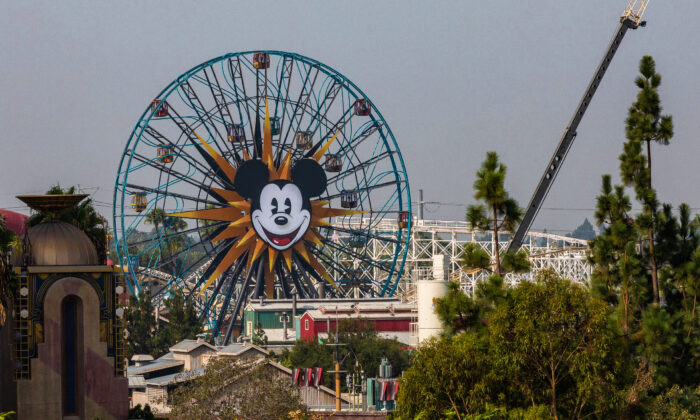 Disneyland, seen from the location of a press conference calling for the reopening of Orange County theme parks, in Anaheim, Calif., on Sept. 16, 2020. (John Fredricks/The Epoch Times)
Southern California

LOS ANGELES—Disneyland, Universal Studios, and other theme parks across the state, along with outdoor ballparks and stadiums, can reopen as early as April 1 subject to counties’ rates of COVID-19 spread and with strict capacity-control mandates and required mask-wearing, state officials announced March 5.

The announcement marks a major policy shift relating to theme parks, which the state had earlier said would not be permitted to reopen until their home counties reached the least-restrictive tier of the state’s “Blueprint for a Safer Economy,” a four-level system guiding reopenings of businesses and
other attractions.

Under the new guidance announced by the California Department of Public Health, theme parks will now be allowed to reopen when their home county reaches the “red” tier, which is the second-most-restrictive level of the economic blueprint.

Los Angeles County—home to Universal Studios Hollywood and Six Flags Magic Mountain—and Orange County—home to the Disneyland Resort and Knott’s Berry Farm—are both still in the most restrictive
“purple” tier, but both could advance to the “red” tier by the end of the month.

When the counties reach the “red” tier, theme parks can open at 15 percent of overall capacity. When they advance to the “orange” tier, capacity will be increased to 25 percent, and in the least-restrictive “yellow” tier, capacity of 35 percent will be allowed.

Only in-state visitors will be allowed at the theme parks.

Gov. Gavin Newsom had hinted during a visit to Long Beach earlier this week that a deal was imminent to allow fans to attend sporting events.

Under the guidance announced Friday, outdoor sports and live performance venues can also reopen on April 1, also with capacity limits based on the county’s tier rankings.

For counties in the most restrictive “purple” tier, outdoor venues will be strictly limited to a total of 100 people, with only local residents permitted, advance reservations or tickets required and no concessions or concourse sales allowed.

Only in-state visitors will be permitted to the venues in counties in the “red,” “orange” and “yellow” tiers.

“With case rates and hospitalizations significantly lower, the arrival of three highly effective vaccines and targeted efforts aimed at vaccinating the most vulnerable communities, California can begin gradually and safely bringing back more activities, especially those that occur outdoors and where consistent masking is possible,” said Dr. Mark Ghaly, the state’s Health and Human Services secretary. “Even with these changes, California retains some of the most robust public health protocols in the country.”

Ken Potrock, president of Disneyland Resort, issued a statement saying, “We are encouraged that theme parks now have a path toward reopening this spring, getting thousands of people back to work and greatly helping neighboring businesses and our entire community. With responsible Disney safety
protocols already implemented around the world, we can’t wait to welcome our guests back and look forward to sharing an opening date soon.”

The president of the union representing many Disney theme park workers also hailed the news.

“Our Disney cast members are heartened by this good news today that the Disney parks will be reopening in a month,” said Andrea Zinder, president of United Food and Commercial Workers Local 324. “They have been furloughed or out of a job for a year now and are excited to go back to work to provide Californians with a bit more magic in their lives. Our priority will be to continue to work closely with the governor and Disney to ensure our members are kept safe from COVID-19 infections on the job as the parks reopen.”

“We deeply appreciate the partnership with state and local health and government officials, and are thrilled to have finally arrived at this milestone announcement,” Irwin said. “The health and safety of our guests and team members remain our top priority, and we’re committed to ensuring full
compliance with our newly established protocols as we continue to create an exceptional entertainment experience for everyone. We are ready to reopen, ready to bring our team members back to work, ready to help stimulate the local economy and ready to welcome guests.”

Angels President John Carpino said he was grateful to the state and Major League Baseball for developing plans to reopen ballparks to fans, with the new season just around the corner.

“We are thrilled to welcome fans back safely to the Big A,” he said.

“Like the governor, we’re optimistic that California will continue to make progress in the fight against COVID-19 and that we can safely host fans to start the season,” he said. “Safety is paramount, and the Dodgers continue to work with local officials and Major League Baseball to finalizeprotocols to protect players, fans and staff.”

The Dodgers and Angels both indicated that ticket-sale information will be released shortly.