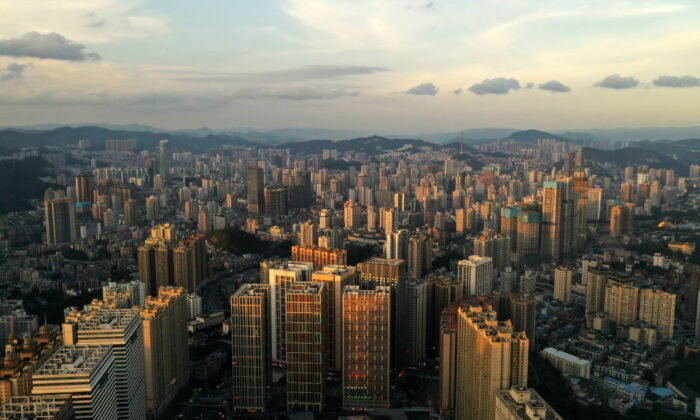 Residents of China’s largest residential complex gathered on the day of the Mid-Autumn Festival to protest food shortages due to the communist regime’s stringent lockdown measures. Local authorities sent in hundreds of police to silence the gathering residents.

China’s southwestern Guizhou province imposed stringent closure measures in its capital city amid the latest COVID-19 flare-up since Sept. 2, shutting businesses and confining people to within their residences.

Huaguoyuan community, located in downtown Nanming District of Guiyang city, has been under “whole-region static management,” a lockdown term recently invented by the communist regime.

Other new phrases for lockdowns used by the communist authorities include “silent management,” “feet not stepping out of the door,” and “home quarantine,” after the word “lockdown” triggered strong outcries from fed-up Chinese citizens.

Huaguoyuan is China’s largest shantytown renovation project, with a total area of 1,000 hectares and 311 high-rise buildings with an average height of over 40 stories. It is home to 450,000 residents and 40,500 businesses.

The local government has only allowed one supermarket to open to serve residents in the supersized community, according to China’s major financial news portal Caixin. A resident told Caixin that the supermarket has since run out of stock, and that residents have received no food from the government and are not able to purchase food via e-commerce channels.

Over 1,000 residents in Huaguoyuan walked down to the highrise lobbies on Sept. 10 to protest against the draconian isolation measures and demanding the government guarantee food supplies, a resident told the Chinese language edition of The Epoch Times on Sept. 12.

However, the protest lasted only one night. On Sept. 11, 400 police were mobilized to Huaguoyuan to suppress the protests, the resident said.

An official report by China News, a state-run mouthpiece, confirmed that 400 police “assembled instantly and rushed to Huaguoyuan to carry out pandemic prevention and control work” at 11:30 p.m. on Sept. 11.

Guiyang has reported one symptomatic case and 70 asymptomatic cases as of Sept. 13, according to a local official propaganda outlet Guizhou Daily. The Guiyang municipal health bureau added 25 high-risk areas, eight of which are located in Huaguoyuan.

The footage that the Chinese language edition of The Epoch Times obtained shows people gathering in a compound of tall buildings. People wearing protective clothing spoke through a loudspeaker, asking people not to gather during the pandemic outbreak.

Ms. Zhang (pseudonym), a resident of Huaguoyuan, said that many people were starving due to the lockdown and that the shortage of food was due to government negligence.

She told the publication on Sept. 12 that there were large quantities of donated food, but the food had been intercepted by the property management company, which either let the food decay or sold it for high prices.

The protests were triggered by the actions of the property management company Homnicen Group, which shut down all the lifts in the M Zone of Huaguoyuan community on Sept. 10, according to Zhang.

Huaguoyuan is divided into roughly 20 zones, according to Caixin’s report.

“Sept. 10 is Mid-Autumn Festival,” Zhang said, adding that the company asked residents to keep all household garbage in front of their doors, despite the bad smell in the hot summer weather.

“The property management also seized all the mooncakes and vegetables [donated to the residents], repacked them, and asked residents to pay for them,” Zhang said.

Angry residents of the M Zone all walked down the buildings and gathered on the ground to protest, according to Zhang.

She said people in Caijiaguan village on the western outskirts of Guiyang also protested against the shortage of food and lockdown measures on the same day.

A man speaking the local dialect was heard saying in video footage that all residents of M Zone had come down to protest and that the property company was selling donated food to residents.

The Epoch Times wasn’t able to verify the authenticity of the footage.

The whole Huaguoyuan community has been isolated since Sept. 3, and the government has only supplied residents with one bag of food containing a Chinese cabbage, an onion, two potatoes, two pieces of ginger, and one bulb of garlic, according to Zhang.

She said that the local government sent all the food to the property management company for distribution.

“But Homnicen Group hoards all of them, packages them again, and sells them to us at high prices,” Zhang told the publication.

“A bag of one cabbage, two carrots, several green peppers, two tomatoes, two eggplants, two pieces of ginger, and a bulb of garlic is marked for sale for prices from 59 yuan ($8.5) to 99 yuan ($14). They set the prices casually; if we don’t buy from them, we have nothing to eat,” Zhang said.

A recording shared with The Epoch Times shows a female government staffer admitting that the property company had taken the food donations.

A resident, who claimed to be from the M Zone, is heard asking the government staffer why no supplies had been distributed to residents. The staffer replied that the property management company had locked all the supplies in their storehouse.

“We have reported what you [the residents] have told us to higher authorities. The leaders will adopt measures. At the moment, we haven’t heard from them yet. We must wait for their decision,” the woman said.

The Epoch Times wasn’t able to verify the authenticity of the recording.

Zhang told The Epoch Times that the property management company sometimes put rotten vegetables on the ground floors, telling residents they could pick them up. “But they have gone bad, with leaves totally decayed and juice coming out; they are not edible,” Zhang said.

Censored in China, Help and Attention From Outside Needed

She asked the outside world for help and attention.

“Many people are starving in our place, but our posts and video footage have been banned in China. On the night of our protests, two people, who claimed themselves to be reporters, didn’t report on our situation.  Instead, they kept making calls onsite to ban and delete our live streaming,” Zhang said.

“Please help us spread the information and call attention [of the outside world] to the governance problems in Guiyang,” she told The Epoch Times.

The Epoch Times called the customer service of the property management company on Sept. 13 for comment.

A female staffer, who didn’t give her name, told the publication that they had shut down the lifts at the order of the local government, which was “to control traffic volume during the pandemic.”

The Epoch Times reached out to the Huaguoyuan community service center and the neighborhood committee of M Zone on Sept. 13 but received no reply as of publication.