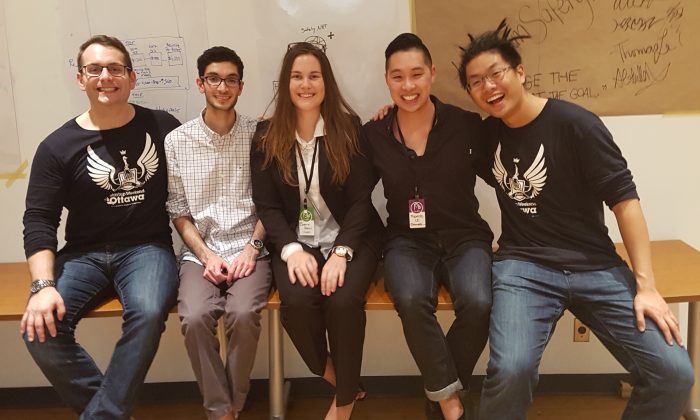 OTTAWA—Startup Weekend provides the water and sunlight from which a remarkable transformation takes place in about 48 hours. An exuberant and perhaps naïve individual with an idea—the seed—grows into a cohesive team with a business plan, market analysis, and product validation.

Certainly, new dreams are created, but Startup Weekend is also about building relationships among entrepreneurs in the local community and volunteers giving back for what they’ve gained.

A panel of eight judges—”sharks” or “dragons”—made up of professors, established entrepreneurs, a doctor, and a teacher / maker listened to 18 final pitches from potential startups at Startup Weekend Ottawa at the University of Ottawa from Nov. 18–20.

You come here and take a risk or you can just play it safe.
— Alex Steeves, SafetyNet

The judges crowned SafetyNet overall winner in the General category and in the Mobile Health category, which was a specific area of focus at this event.

“I have a senior advisor that works in the medical field and he told me that the revolution will come from the patients. And SafetyNet tonight, you did it,” said judge Mikael Charette, COO of WEllfunded.

The SafetyNet pitch began with a compelling slide showing the faces of 28 people who had all died waiting for emergency medical treatment.

The startup is attempting to solve the problem of preventable deaths in emergency rooms using warning wristbands that monitor key body functions. The team reached out to doctors who provided enthusiastic feedback and presented a convincing business case for how the startup could make money through selling the hardware and a subscription maintenance service.

Lightning in a Bottle

Steeves, 28, was still on the fence about taking part in his first Startup Weekend just 20 minutes before it began on the evening of Friday, Nov. 18. He is working on his masters in biomedical engineering and was about to head home after working in the lab.

His father and brother are engineers who moved in to business, so he figured making connections and listening to some new ideas would be to his benefit when taking part in Startup Weekend.

“You come here and take a risk or you can just play it safe,” Steeves said. What’s involved is practically working around the clock for the whole weekend trying to see if an idea has legs.

“And none of us played it safe. We put everything out there,” Steeves said.

Le, 23, was initially coming just to volunteer, but one of the organizers convinced him to put himself out there. And thus the freelance designer took part in his first Startup Weekend.

Initially the team wasn’t gaining traction—it was just Steeves and Le and they considered folding.

We all had the same mindset that even if we don’t win tonight, we already won.
— Herman Liao, SafetyNet

But their pitch convinced Liao and the mentors at Startup Weekend told them that if the team has three people, they’d be good.

Vukovic and Mostafa, both 19, didn’t have a team as late as 11 a.m. Saturday morning. “Walking around that morning, we just wanted to hear how we could make an impact,” Vukovic said.

“It definitely seemed like one of the most sustainable businesses,” Mostafa said. “We had a lot of interest in the healthcare side of things and technology.”

Steeves said everybody led the project together and that it was a total team effort.

“We came together as friends and not like, ‘I’m going to use you for what you can do and that’s it,'” Le added.

All Winners, No Losers

Although Startup Weekend is structured as a competition with prizes for winners, the most important thing is learning how to move an idea along and developing solid working relationships.

“It was an amazing experience for us,” he said. While his team didn’t win, he told the enthusiastic crowd on Friday, “The biggest prize you will win tonight is the people you will meet here.” Startup Weekend is not about the ideas themselves.

“We all had the same mindset that even if we don’t win tonight, we already won—everything we’ve done over the weekend, we know we’re going to carry this and move on,” he said.

All team members are co-founders and have equal share in what was built over the weekend. Ideas are bounced around and the end product can be very different from the initial pitch.

Steeves pitched SafetyNet on Friday night as something like Facebook in times of crisis. Your safety net of friends will “catch you” when you are in some kind of trouble through GPS. Steeves’ pitch was among 26 others. It was one of 17 selected to move on in the competition late Friday night.

I feel like I have to pay it forward.
— Minh Dao

“When you do start, you will inevitably pivot,” said Aydin Mirzaee in his keynote speech at the beginning of the weekend to the legion of entrepreneurs. A University of Ottawa graduate, Mirzaee started an online survey company in 2008 and is now Director of Product with Survey Monkey.

His advice to the teams included a mantra of Amazon founder Jeff Bezos—be strong on the vision, but flexible on tactics. SafetyNet took that to heart. “Change the plan, not the goal” was the team’s motto as it iterated through idea after idea.

As some first-time entrepreneurs contemplate founding a startup, Mirzaee told them to just get started. Everybody has an idea—none of which are perfect or necessarily new—but the hard thing to do is to take action, Mirzaee said.

“Today is the beginning of something great,” Mirzaee concluded.

The energy and excitement of Startup Weekend attracts many volunteers, including prior participants.

Minh Dao, a product designer, says he felt humbled by meeting so many great people and understanding what it takes to build a startup. His team won three years ago with “Tattoo Hero,” which aimed to take the tattoo industry into the digital age.

He was reluctant to take part in his first Startup Weekend, having to pay a fee to participate, and “losing” his whole weekend. He was already working full-time at IBM.

Dao says he didn’t realize what he could get out of Startup Weekend and volunteering as an advisor on Saturday allowed him to give back to the entrepreneur community in Ottawa. “I feel like I have to pay it forward, to be honest. I need to advocate for it,” he said.

Philip Karpiak, a freelance designer, has been to a couple of startup weekends as an observer and mentor. He took part in Ottawa’s first Startup Weekend in April 2012 and his team won third place.

Karpiak left that team, but the two people who stuck with the original idea added some refinements and were eventually accepted into Y Combinator, considered the world’s most prestigious startup accelerator. The reality is 65 percent of startups fail because of team issues, although Karpiak and his former team remained good friends.

Karpiak sees volunteering for Startup Weekend as an ongoing learning opportunity. “As I’m getting older, I feel like I’m getting out of touch with some aspects of development and design,” Karpiak said.

The Startup Weekend movement began in 2007 and now has over 200,000 alumni who have participated in the hyper-local grassroots movement. Ottawa’s event took place alongside nearly 200 other startup weekends around the world capping Global Entrepreneurship Week.

Bright, talented individuals with ideas need such grassroots events. The open, collaborative environment at Startup Weekend gives a chance for ideas to be validated in a concerted and effective way through the spirit of friendly competition.

Vukovic had tears in her eyes upon winning. For her, it was not just a competition, but a chance to save lives. She couldn’t sleep the night before the final day of the competition.

“Every single picture we had up there tonight, those are people, those are fathers, brothers, mothers—that literally gave me chills tonight,” Vukovic said.