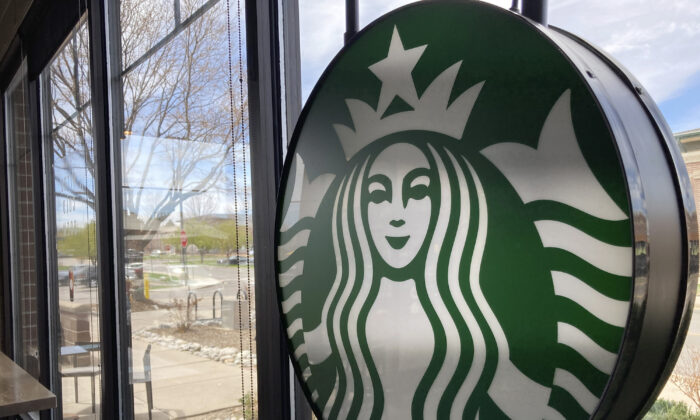 A sign bearing the corporate logo hangs in the window of a Starbucks in Denver, Colo., on April 26, 2021. (David Zalubowski/AP Photo)
Companies

NEW YORK—A federal labor board postponed a scheduled vote count that was to have taken place on Wednesday that would determine whether three more Starbucks Corp. locations in Buffalo, New York, will join a union.

Because the National Labor Relations Board (NLRB) had not ruled on an outstanding appeal by Starbucks’ by the time votes were to be tallied, the board impounded the ballots to be counted in the future.

Even so, momentum to unionize more of the company’s locations in the United States continues to build.

In just the last six months, employees at more than 100 stores in at least 26 states have petitioned the NLRB to hold union elections in their locations–including flagship Reserve Roastery locations in New York and Seattle, Starbucks’ hometown.

The union is also winning its legal arguments. On Wednesday, the NLRB rejected an appeal by Starbucks to alter election procedures for a cafe in Mesa, Arizona—a ruling that could point to speedier elections going forward.

In the Arizona case, Starbucks asked the NLRB to hold elections for all stores in the area, rather than one store at a time as the union wanted.

The coffee company had made the same argument—and lost—for two other Buffalo locations that in December became the first company-owned stores in the United States to join a union.

With its latest ruling in Arizona, the board is sending a message that if Starbucks makes the same argument in yet more cases, it must provide new evidence or else the board may “dismiss [these appeals] quickly and proceed with the vote count,” said John Logan, a labor professor at San Francisco State University.

Ballots from the Arizona store are now set to be counted on Friday afternoon.

Starbucks said in a statement Wednesday that “all partners in a market or district deserve the right to vote on a decision that will impact them.”

In Buffalo, the employees seeking to join Workers United, an affiliate of the Service Employees International Union, said they were disappointed with the delay but optimistic.

“It’s not a matter of if we’ll win but when we’ll win,” said employee Daniel Rojas.

By Hilary Russ and Danielle Kaye