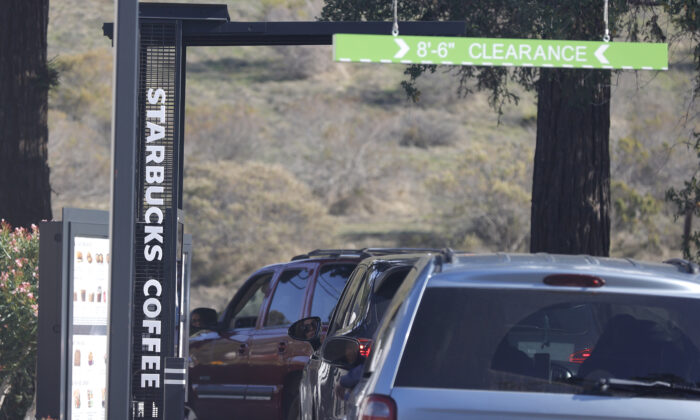 Customers line up in a drive thru at a Starbucks store in Novato, Calif., on Oct. 29, 2021. (Justin Sullivan/Getty Images)
Markets

Starbucks Corporation is trading up more than 3 percent Tuesday after MKM Partners raised its price target on the stock from $114 to $130.

The coffee chain is in the midst of a push to unionize and employees at three Starbucks stores in upstate New York have mailed in voting ballots, which are expected to be tallied on Thursday. On Monday, Sen. Bernie Sanders of Vermont met with four Starbucks workers, who are members of the Starbucks Workers United committee, via video conference to show support for the effort.

If successful, employees from the three Buffalo area stores will form Starbucks’ first U.S. labor union, with employees from other parts of the country beginning to organize similar efforts.

Whichever way the vote goes, it’s unlikely to affect Starbucks’ stock, which has also remained largely unaffected by the general markets regardless of which way they move. After a months-long period of downward consolidation, Starbucks may be in for a long-term bullish break.

After gapping up over 1 percent higher on Tuesday, Starbucks immediately ran up toward a resistance level at $115.57. The gap up negated the downtrend the stock had been trading in since Nov. 5 by printing a higher high over the Nov. 12 and Nov. 6 lower high of $114.26. The lower high that was printed on two separate days had also created a bearish double top pattern, which was negated by Tuesday’s price action.

Starbucks has gaps above on its chart, which are likely to be filled in the future because gaps on charts fill about 90 percent of the time. The first gap falls between $117.47 and $118.36 and the second higher gap between the $123.37 and $124.25 range. The middle of the first gap is only about 1.7 percent away from the current share price, which makes it likely Starbucks will pop up into the range in the near future.

On the monthly chart, Starbucks may have formed a massive bull flag pattern with the pole formed between April 1 and July 1 and the flag of the formation between Aug. 2 into December. The measured move of the pattern is about 100 percent, which could indicate Starbucks could trade at over the $200 mark in the future although the move, if it happened, would take many months to play out and would depend on many factors.

Bulls want to see increasing big bullish volume push Starbucks up into the closest overhead gap, which would pop the stock up over a resistance level near the $117 level. Above the area, there is further resistance at $120.83.

Bears want to see big bearish volume push Starbucks back down below the $115.57 level and toward a lower support at the $113.86 mark. If the stock falls beneath the level, there is further support at $111.05.