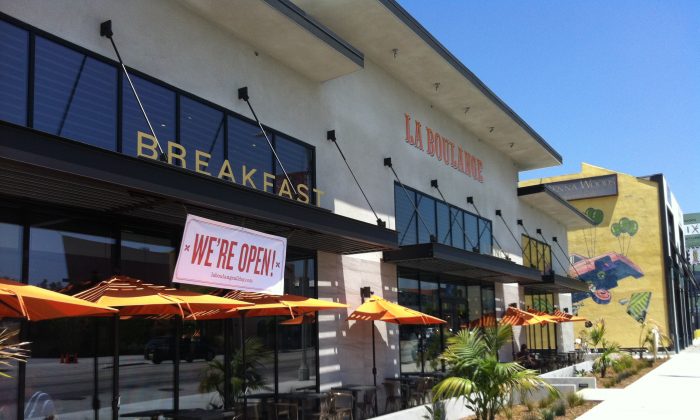 Starbucks-owned La Boulange is open for its second day of business in Los Angeles on June 13, 2014. (Sarah Le)
Business

On Friday morning, just one day after the brand opened its first all-day restaurant, the customers seemed to be following instructions.

This restaurant represents Starbucks’ expansion into the restaurant business. La Boulange, which it acquired in 2012, already has locations in San Francisco, but none quite like this one.

This restaurant is open for breakfast, lunch, and dinner until 10 p.m. It of course serves Starbucks coffee, but also other drinks, like extra-thick milkshakes. The food menu includes soups, salads, and burgers.

Patron Jennifer Pellerito does marketing at a consulting company. She was impressed with the food and thought the restaurant design was stunning.

“I think it’s fabulous. I’m so glad that it’s opened up here, and I’ve been here three times already,” she said.

She lives in the area, and she’s been waiting a few months for the restaurant to open up. She appreciated that the restaurant carried beer, wine, and cocktails. She says the restaurant is innovative and has a strong business model.

Barbara Perrin, a stay-at-home mom who came to eat here with her family, said the restaurant’s coffee was great, and she liked that the place was kid-friendly. She said they would be back.

For every Club Sandwich ($9.45) bought at the restaurant, La Boulange will donate 35 cents to the Los Angeles Regional Food Bank, which is enough to buy one meal. La Boulange has already raised $1 million for a variety of San Francisco non-profits.

“This is an amazing time for the La Boulange brand,” said a La Boulange spokesperson in a statement. “The new all-day menu brings a differentiated food experience to the vibrant Los Angeles food scene. We believe that the concept has tremendous growth opportunities.”

Starbucks would not reveal specifically whether or where they were planning additional restaurants like the Los Angeles one.

La Boulange Café & Bakery was founded in 1996. Starbucks bought it two years ago, and began serving its pastries in many of its Starbucks coffeehouses.

Starbucks has been expanding its influence lately with a colorful Frappuccino truck that’s been parking at popular locations in Los Angeles this month.