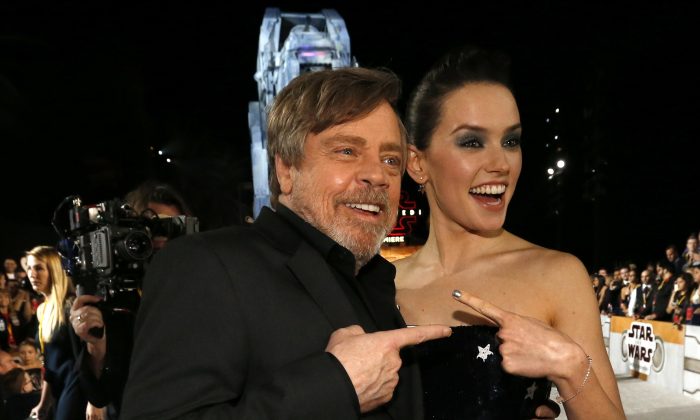 Los Angeles—The galaxy far, far away was brought to life in downtown Los Angeles on Saturday for the world premiere of “Star Wars: The Last Jedi” where the anticipated first screening was dedicated to the franchise’s late star, Carrie Fisher.

“I want to dedicate tonight to Carrie, who is up there right now flipping me the bird, saying ‘Damn it Rian, don’t you dare make this night a solemn tribute,’” the film’s writer-director Rian Johnson said as he introduced the screening.

“So let’s all have a blast tonight for Carrie,” he said.

The film ends with a dedication to Fisher, who plays Princess Leia. The actress died at age 60 last December after completing her work on “The Last Jedi”.

Her character, now known as General Leia Organa, leader of the Resistance, plays a key role in the film.

Walt Disney Co.’s “The Last Jedi”, out in U.S. theaters on Dec. 15, follows 2015’s “Star Wars: The Force Awakens” and picks up with the Resistance fighting off Supreme Leader Snoke’s First Order which is trying to take control of the galaxy.

Rey (Daisy Ridley), meanwhile, tries to convince Luke Skywalker (Mark Hamill) to join the Resistance fight and bring a spark of hope to the rebels against Snoke’s tyrannical rule.

The film explores themes of the battle to find a balance in the Force, the supernatural energy that runs through the fictional “Star Wars” galaxy. Reviews of the film are embargoed until Dec. 12.

Guests walked into the entrance of the premiere flanked by larger-than-life AT-AT Walker transport vehicles.

Johnson paid tribute to Fisher on the red carpet.

“Once the audience sees her performance in this movie, she’s going to be there in all our hearts,” he said. “It’s bizarre not having her here tonight. She would be the life of the party.”

We work hard to deliver the most important and interesting news every day for you, but would like to ask a little favor in return: Would you please share this story with your friends? Thank you!