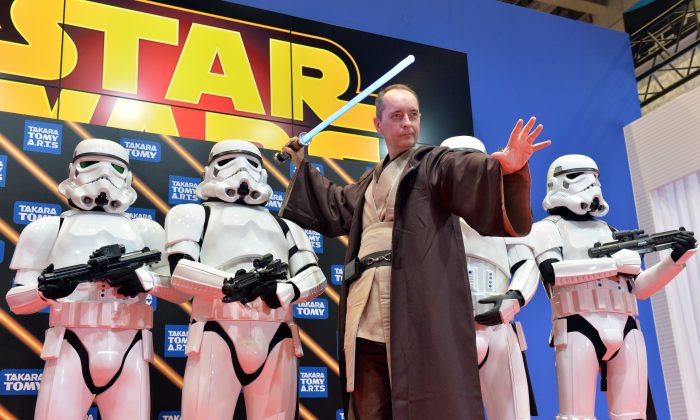 Japan's toy maker Tomy executive vice president and new chief operating officer (COO) Harold George Meij (C) poses with stom troopers as they introduce the new line up of Star Wars toys at the Tokyo Toy Show in Tokyo on June 12, 2014. Consumers are rebelling against the new Star Wars but Lucasfilm doesn't have to yield to them. (YOSHIKAZU TSUNO/AFP/Getty Images)
Entertainment

According to the Daily Mail, director J.J. Abrams and his crew are currently filming Episode VII scenes in the Puzzlewood, the Forest of Dean, Gloucestershire.

Puzzlewood has been used to film Doctor Who, Atlantis, and Merllin by the BBC, and is said to have inspired J.R.R. Tolkien’s woodlands in Lord of the Rings.

This could mean that the Episode VII could revisit the mysterious forest/swamp world of Dagobah, where Master Jedi Yoda resided in exile, or the Forest Moon of Endor that the Ewoks inhibit, according to fan speculation.

This suggests that the desert world of Tatooine could feature. Tatooine is where the legendary Jedi Luke Skywalker lived for most of his childhood and early adult life.

NEW YORK (AP) — Harrison Ford’s injury will cause production on “Star Wars: Episode VII” to be suspended for two weeks.

Disney announced Sunday that shooting would be halted for two weeks in August to adjust the production schedule following Ford’s injury. The 71-year-old broke his leg in June during filming of the much-anticipated sequel at Pinewood Studios outside of London.

Disney had said earlier that Ford’s injury wouldn’t cause any delays. The studio said Sunday that “Episode VII” is still “on track” to wrap in the fall and be released in December 2015.

The accident involved a spacecraft door on the Millennium Falcon falling on Ford’s leg. His recuperation was expected to take up to two months.