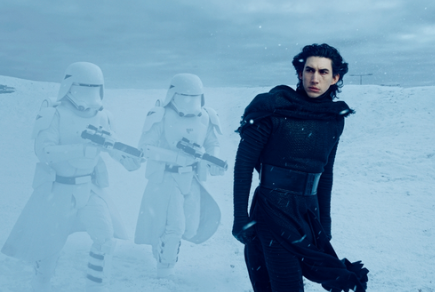 Adam Driver in Star Wars Episode 7 as one of the villains. (Lucasfilm)
Entertainment

That’s been known for a while, but the big news now is some new rumors about the villains.

Related Coverage
Star Wars Is Back. Get in Mood With These Most Hilarious Stormtrooper Pictures

User Bluestreaking over at Star Wars 7 News, one of the most reliable blogs when it comes to Star Wars news and opinion, speculates about the relationship between Phasma, Ren, and Hux.

He notes that Ren has been the only one spotted with a lightsaber in any leaked footage or official trailers, which has led to Ren being compared with Sith Lords. Lightsabers are typically only wielded by Sith Lords or Jedis.

He then goes on to compare Hux in terms of place in chain of command to Grand Moff Tarkin, who was sort of the Imperial’s main partner to Darth Vader.

“Now Hux has an actual rank within the First Order, it appears that Kylo Ren does not. Something that has stuck out to everyone is how young General Hux is for someone of his rank. That is why I propose that instead of a Tarkin/Vader relationship for Hux and Kylo we will instead have a dualistic antagonism between the two villains,” Bluestreaking wrote.

“I think that the two will severely dislike each other and suffer from competing world views. Kylo thinks Hux is getting in the way of his greater mission while Hux views Kylo as a spoiled aristocrat who interferes too much in military matters. I feel like a great point of contention will arise between the two with Captain Phasma.”

He believes Phasma will be a tool of Hux’s, but Ren will try to utilize Phasma to hunt down one of the good guys, angering Hux.

Ultimately, the three villains will also need someone higher up to keep them all in line, and that person or being is yet unclear, but could be Snoke.

Meanwhile, in other Star Wars news, Driver recently spoke to Esquire for its September issue.

“Everyone on set is so good at their job … It was an organic process,” he said. “You get these moments where you realize – wow, you’re part of Star Wars, you can’t [expletive] up!”

MORE: Reviews for Fear The Walking Dead Reviews Are Coming In … And They’re Really Positive

Driver also said that everyone “turns into four-year-olds” around Chewbacca, and talked about director JJ Abrams.

“With JJ, it’s all about character and story, not special effects,” he said. “And we still talk about character now. Whenever I’ve worked with great directors, it’s always that way. You’re constantly finding it. Things evolve and change even as you’re filming.”