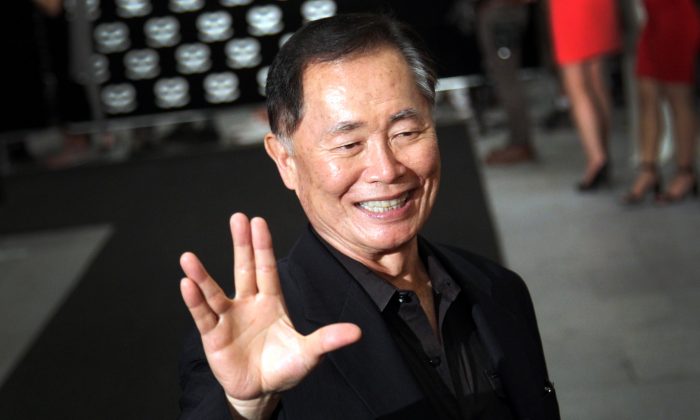 Actor George Takei gesturing with a hand greeting made popular by the TV series "Star Trek" at the Marina Bay Sands hotel in Singapore for the inaugural Social Star Awards, May 23, 2013. (AP Photo/Wong Maye-E)
Entertainment

An increasingly circulated rumor claims that CBS and Netflix are in talks over a new Star Trek series.

The popular franchise regularly gets a lot of views on the streaming service, providing context for the talks.

But Larry Nemecek– who is quoted in the rumor–says that the rumor is not true.

“I know Trek fans are hungry for new material and hoping that someone ‘gets it’ and gets on with doing one. That’s why everything from the continuing novels to fan fiction, to Star Trek Online and other games, to the fan films, to cosplayers and prop and shipbuilders are all still going strong: People are desperate for new Star Trek—including the new fans driven by JJ or the Bluray remasters and, yes, mass Netlfix availability. And, said desperate fans pounce on every crumb that’s out there — as good fans would. Or they even do more, like organizing a Facebook “petition” campaign to get Netflix to produce a ‘fifth season’ of Enterprise,” he said in a blog post.

“But this non-bylined writer known only as “Starfleet Intelligence” is too wrapped up in tossing around jazzy phrases of TheBizSpeak in this post, and has the situation blown up way too big —though it makes a nice screaming headline. I wish he or she had talked to me afterward for some real context to the tiny bit I DID mention. (or even got my bio right.)”

Netflix is always looking for new series to produce, including new seasons of standing franchises.

Nemecek said that Star Trek is a top draw on Netflix and that “there have been overtures” but “none taken” so far.

“That’s it, guys. I appreciate the pedestal, of sorts, but this excitable blogger makes it sound as if show budgets and writer’s guides for a done-deal Trek series are already floating around in CBS offices. Maybe they are—but not to my knowledge,” he said.

“We all know plenty of people in private and public have pitched show concepts and formats—and on a ‘channel’ that makes financial and distributional sense. And, we do know that one good way to help get Star Trek back is to keep those Netflix viewer ‘ratings’ tickers clicking right along marathon-style, as a barometer, to reveal any and all Trek shows being watched. But inertia and the unanswered questions of who, what, when, where, and how much have, so far, won out. Sadly.”