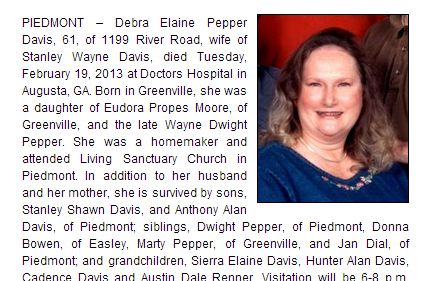 Debra Davis's obituary. The 61-year-old was set on fire by her son, Stanley Shawn Davis, who pleaded guilty Oct. 3, 2013. (Screenshot/GrayMortuary.com)
US

Stanley Shawn Davis has been sentenced to 30 years in prison after pleading guilty to setting his mother, Debra Davis, 61, on fire.

His mother died in hospital six weeks after. Neighbors who called 911 told investigators that the woman had said her son did it.

On the obituary page for Davis, comments from shortly after her death in February recall her kindness and some also expressed condolences for her family.

Chris and Cindy Barron, who described themselves a “waiting room buddies” of the family, wrote: “Stanley, Anthony, & Jessie… we love you and you are in our prayers.”

Wanda Turner wrote: “I graduated from High School with Debra and I have very fond memories of her. She was truly a beautiful person, inside and out. I will keep the entire family in my prayers. Rest in peace my sweet friend.”

Sharon Guthrie wrote: “Debra was a very sweet person to know. kind, adorable. I didnt get to see her much, when I did we had long talks. I would like to express my deepest sympathy to the family.”