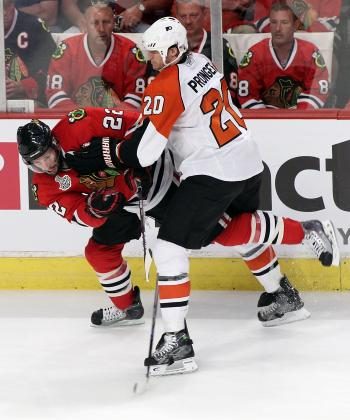 By Rahul Vaidyanath
Print
The Chicago Blackhawks won a wild and crazy shootout over the Philadelphia Flyers in Game 1 of the Stanley Cup finals 6–5 on Saturday night at the United Center in Chicago.

Both teams were coming off lengthy breaks after winning their conference finals series and the rust was evident on defense and with both unheralded goalies.

Flyers goalie Michael Leighton was sent to the showers after allowing five goals on 20 shots. Long forgotten are his three shutouts against Montreal.

With the rate at which goals were coming in the first two periods, one had to feel that it would be a case of last goal wins. The lead changed hands five times in this game.

The scoring load was carried by the second and third lines with Danny Briere having an outstanding game with one goal and three assists for the Flyers and Troy Brouwer netting twice and having one assist. Brouwer was the game’s first star.

“Right away, guys started scoring goals and it just took off from there,” said Brouwer in a postgame interview with CBC.

The Flyers held a 3–2 lead after one period. After two periods, the score was tied 5–5.

“Guys were maybe unsure of themselves, nerves may have been a part of it,” continued Brouwer.

Things settled down in the third period and Tomas Kopecky scored the winning goal as he slid a sharp-angle shot past Brian Boucher. Kopecky was inserted in the lineup due to the injury to Andrew Ladd.

“We gotta tighten up a little bit, help our goalie out,” said Brouwer when discussing what changed in the third period.

Dave Bolland had a shorthanded goal and an assist and finished the night +3. He led all Blackhawks forwards in ice time with 20:25.

Surprisingly, the “Broad Street Bullies” didn’t take any penalties in the entire game in an uncharacteristic display of discipline. Dan Carcillo, Philadelphia’s most penalized player, was a healthy scratch.