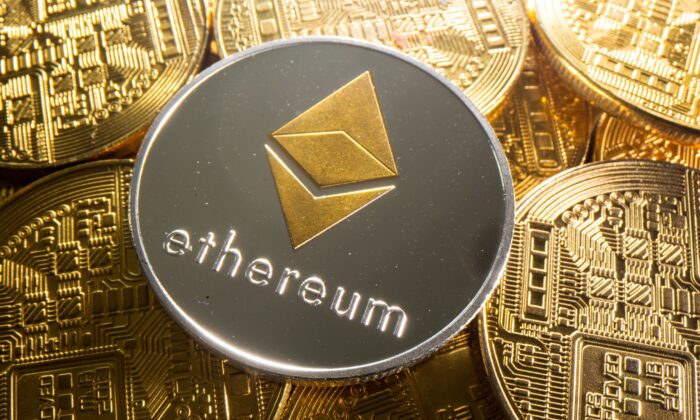 A representation of cryptocurrency Ethereum is seen in this illustration taken on Aug. 6, 2021. (Dado Ruvic/Illustration/Reuters)
US News

The head of the U.S. Senate banking committee sent letters on Tuesday to stablecoin issuers and exchanges urging them to be more transparent about how they are protecting consumers and investors following multiple risks highlighted in the recent report by the President’s Working Group on Financial Markets (PWG).

Sen. Sherrod Brown (D-Ohio), chair of the U.S. Senate Committee on Banking, Housing, and Urban Affairs, also sent letters to Coinbase, Gemini, Paxos, TrustToken,  Binance.US, and Centre, stating that he was concerned some consumers and investors may not understand how stablecoins work and the potential risks associated with the digital currency.

“Consumers’ increased use of stablecoins, and their importance in effecting transactions in digital assets, underscores the need for greater understanding of the basic operation, and limitations, of Tether,” Brown said.

Stablecoins are a new class of cryptocurrencies designed to have a stable price relative to traditional currencies, or to a commodity such as gold, making them less volatile than other digital assets. They are typically used to facilitate trading, lending, or borrowing of other digital assets, predominantly on or through digital asset trading platforms and exchanges.

The digital coins are typically created or “minted” on the blockchain in exchange for fiat currency that an issuer receives from a user or third party.

In its report earlier this month, the PWG, along with the Federal Deposit Insurance Corporation and the Office of the Comptroller of the Currency, noted that the market capitalization of stablecoins issued by the largest stablecoin issuers exceeded $127 billion as of October 2021. That figure reflects an almost 500 percent increase over the prior year.

However, the same report also noted multiple risks associated with the use of stablecoins, such as fraud, misappropriation, manipulative trading activities, among others. The PWG called on Congress to “act promptly to enact legislation to ensure that payment stablecoins and payment stablecoin arrangements are subject to a federal prudential framework on a consistent and comprehensive basis.”

“The complex terms and conditions applicable to digital assets and stablecoins, as well as the need for reliable and resilient underlying networks, can make it difficult for investors and consumers to fully understand the details of how those assets function and their potential risks,” Brown wrote in his letter.

“I have significant concerns with the non-standardized terms applicable to redemption of particular stablecoins, how those terms differ from traditional assets, and how those terms may not be consistent across digital asset trading platforms.”

The Ohio Senator asked issuers and exchanges to be more transparent and provide in” clear, straightforward terms,” full details regarding the basic purchase, exchange, or minting processes by which customers can acquire Tether for U.S. dollars.

“In your answer, explain any relevant limitations or qualifications to engaging in and completing that process,” Brown wrote.

Brown also asked issuers to provide full details of any limits to this process, to reveal any special arrangements that those issuers have with specific trading platforms, and to share exactly how many Tether tokens have been issued and redeemed since its inception in 2014.

The senator asked issuers to respond by Dec. 3.

Brown’s letter comes shortly after JP Morgan chairman and CEO Jamie Dimon said that governments will soon regulate cryptocurrencies. Dimon has been outspoken about digital currencies in the past, previously telling Axios that it has “no intrinsic value” and that regulators are going to “regulate the hell out of it.”

Meanwhile, in August, Circle announced it was under investigation by the U.S. Securities and Exchange Commission (SEC). The peer-to-peer payments technology company said it has received an “investigative subpoena” from the SEC requesting “documents and information regarding certain of our holdings, customer programs and operations.”