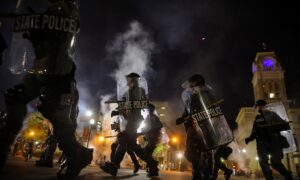 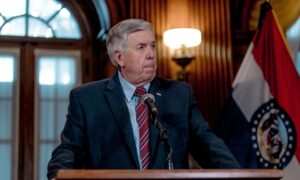 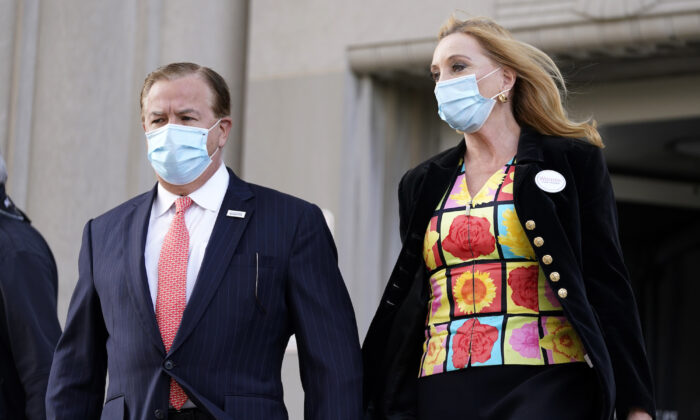 Mark and Patricia McCloskey, the couple from St. Louis, Missouri, who pointed guns at Black Lives Matter (BLM) protesters near their home, have pleaded not guilty to felony charges of unlawful use of a weapon and evidence tampering.

The couple, both personal injury lawyers, on Oct. 14 pleaded not guilty to the charges, according to the St. Louis Post-Dispatch.

According to charges filed against the two in July, Mark McCloskey pointed an AR-15 rifle at protesters, while Patricia McCloskey, brandished a semi-automatic handgun. A grand jury later added an evidence tampering charge, with an indictment cited by The Associated Press alleging the semi-automatic pistol was altered in a way that “obstructed the prosecution of Patricia McCloskey.”

Al Watkins, a former attorney to the couple, said last week that the accusations against the McCloskeys “effectively [demonstrate] the highest degree of ineptitude and inappropriate behavior” from Circuit Attorney Kim Gardner’s office. A spokeswoman for Gardner declined to comment.

Gardner, a Democrat, in July charged the couple with felony unlawful use of a weapon. She said that the charges came after a “thorough investigation” with the St. Louis Metropolitan Police Department, and that it is “illegal to wave weapons in a threatening manner at those participating in nonviolent protest.”

Watkins said it wasn’t clear what led to the additional tampering with evidence charge.

The charges relate to a June 28 incident when the McCloskeys brandished guns at BLM protesters outside their home in what they said was self-defense. The couple said shortly after the incident that they were in fear for their lives and also released a statement saying that their actions “were borne solely of fear and apprehension.”

The couple’s attorney Joel Schwartz told KMOV last week that he wasn’t surprised by the indictment and that the grand jury didn’t have all the facts. “Once all the facts are out, it will be clear the McCloskeys committed no crime whatsoever,” he said.

The McCloskeys have blamed the “leftist” Democrats in St. Louis for their plight, while many conservatives have thrown their support behind the couple.

Missouri Gov. Mike Parson, a Republican, has defended the couple’s right to protect their home and said that, if convicted, they can count on his pardon.

They have also received support from President Donald Trump, who in July said that the effort to charge the couple with a crime was “a disgrace.” White House press secretary Kayleigh McEnany said Trump believed “it is absolutely absurd what is happening to the McCloskeys” and that the situation was “an extreme abuse of power by the prosecutor.”

Schwartz said after the couple’s brief court appearance on Oct. 14 that Trump remains interested in the case.

“They have spoken with the president,” Schwartz told reporters after the hearing. “The president contacts them semi-frequently.” He declined to elaborate and the McCloskeys declined to be interviewed.

After a brief court hearing at the St. Louis Circuit Court last week, Mark McCloskey expressed anger that he and his wife faced criminal charges while those who trespassed onto his property did not.

“What you’re witnessing here in this case is just an opportunity for the government—the leftist Democrat government of the city of St. Louis to persecute us for doing no more than exercising our Second Amendment rights,” Mark McCloskey said.

“Every single human being that was in front of my house was a criminal trespasser. They broke down our gate. They trespassed on our property. Not a single one of those people is now charged with anything. We’re charged with felonies that could cost us 4 years of our lives and our law licenses.”

“We didn’t fire a shot. People who were violently protesting in front of our house and were screaming death threats and threats of arson—nobody gets charged, but we get charged,” he said.

Nine Black Lives Matter protesters who were involved in the June 28 incident were initially arrested and charged with misdemeanor trespassing, but on Sept. 29, the city counselor’s office dropped the charges.

A police summary of the incident obtained by The Epoch Times in late June stated: “The victims stated they were on their property when they heard a loud commotion coming from the street. When the victims went to investigate the commotion, they observed a large group of subjects forcefully break an iron gate marked with ‘No Trespassing’ and ‘Private Street’ signs.

“Once through the gate, the victims advised the group that they were on a private street and trespassing and told them to leave. The group began yelling obscenities and threats of harm to both victims. When the victims observed multiple subjects who were armed, they then armed themselves and contacted police.”

Mimi Nguyen-Ly and The Associated Press contributed to this report.