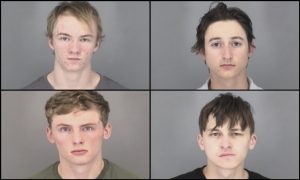 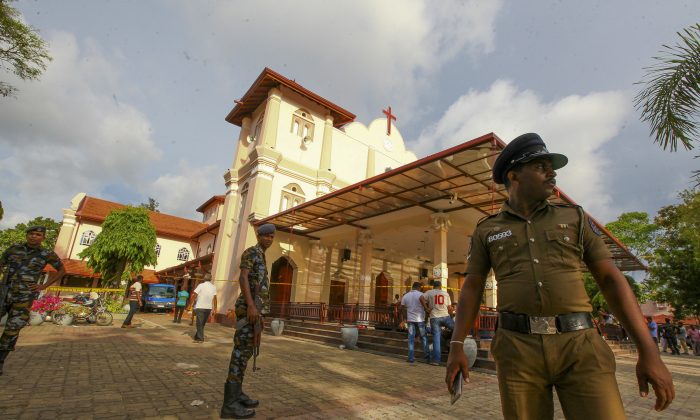 13 Now in Custody
By Melanie Sun

Wickremesinghe told reporters on April 21 that the warning to Sri Lanka’s police hadn’t been acted upon and that the information hadn’t been passed to him.

Some intelligence officers were aware of this incidence. Therefore there was a delay in action. What my father heard was also from an intelligence officer. Serious action need to be taken as to why this warning was ignored. I was in Badulla last night pic.twitter.com/ssJyItJF1x

“We must also look into why adequate precautions were not taken,” Wickremesinghe said.

The intelligence information had been sent to the country’s top officers by Police Chief Pujuth Jayasundara, according to documents cited by AFP.

“A foreign intelligence agency has reported that the NTJ (National Thowheeth Jama’ath) is planning to carry out suicide attacks targeting prominent churches as well as the Indian high commission in Colombo,” the alert said.

The NTJ is a radical Islamic group in Sri Lanka.

While no one has claimed responsibility for the attacks, Sri Lanka’s defense minister, Ruwan Wijewardene, identified the culprits as religious extremists. He said that although they have been identified, their names won’t be released to the public for security reasons.

Minister @RWijewardene addressing the press just now says action will be taken to stop activity of all extremist groups in the country. Social media temporary banned. 12 hour curfew from 6pm. The Dehiwela n Dematagoda blasts seem to be by those in the ring running from the law.

So far, 24 people have been arrested in connection to the attacks.

Wijewardene said that while those arrested were local names, investigators will be looking into whether the extremists had been supported by any “overseas links.” He added that world leaders have offered their assistance for the investigation.

More than 200 people were killed and at least 450 injured in multiple bomb blasts that ripped through churches and luxury hotels in Sri Lanka on Easter Sunday. It is the first major attack in the country since the end of the Sri Lankan civil war between the Marxist Tamil Tigers organization and the government in 2009.

Robert Pape, director of the Chicago Project on Suicide Terrorism, said in 2009 that the Tamil Tigers were suicide bomb innovators.

“The Tamil Tigers are a purely secular suicide terrorist group. They’re not a group that most of the listeners will have heard too much about because even though they’re actually the world leader in suicide terrorism from 1980 to 2003, carrying out more suicide attacks than Hamas or Islamic Jihad,” he said at the time.

One witness who was near St. Anthony’s church when that blast went off told AFP: “I ran inside to help. The priest came out and he was covered in blood.

At St. Sebastian’s Church in Negombo, north of the capital, another blast killed a witness’s brother.

“We are all in shock. We don’t want the country to go back to that dark past where we had to live in fear of suicide blasts all the time,” the witness told AFP of the horrors of the civil war.

Government officials said that 32 foreigners were among those killed and another 30 foreigners were injured in the explosions that tore through congregations and gatherings in hotels in Colombo, Negombo, and Batticaloa.

They included five British people, two of whom had dual U.S. citizenship, and three Indians, according to officials in those countries.

Also among the fatalities were three people from Denmark, two from Turkey, and one from Portugal, Sri Lankan officials said. There were also Chinese and Dutch among the dead, according to media reports.

U.S. Secretary of State Mike Pompeo said U.S. nationals were among those killed, but did not give details.

The government announced a 12-hour nationwide curfew on April 21, banning people from moving locations. The curfew ends on April 22 at 6 a.m. local time. It also shut down social media and messaging services.

“Teams from across Facebook have been working to support first responders and law enforcement as well as to identify and remove content which violates our standards,” a spokesperson from Facebook said.

“We are aware of the government’s statement regarding the temporary blocking of social media platforms. People rely on our services to communicate with their loved ones and we are committed to maintaining our services and helping the community and the country during this tragic time.”

Christian and Muslim leaders in Sri Lanka posted to Facebook in the wake of the blasts to show their unity in the face of the terrorist attacks, amid calls for locals to remain calm and to stay united.

With additional reporting by Jack Phillips