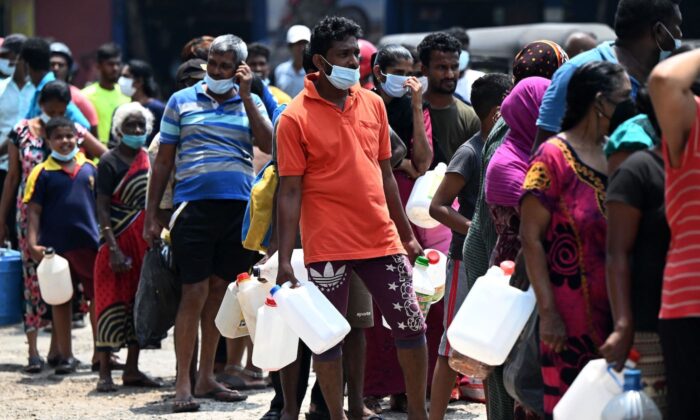 People stand in a line to buy kerosene oil for home use at a gas station in Colombo, Sri Lanka, on March 17, 2022. (Ishara S. Kodikara/AFP via Getty Images)
Asia & Pacific

Sri Lanka’s death toll due to severe drug shortages gripping the country may be worse than that of the COVID-19 pandemic, local doctors said on April 10. The country is experiencing its worst economic crisis in decades.

The Sri Lanka Medical Association (SLMA) said doctors now have to choose which patients to treat as hospitals run out of essential medicines and medical equipment, AFP reported.

“If supplies are not restored within days, the casualties will be far worse than from the pandemic,” SLMA said, adding that all emergency surgeries may soon be suspended because of supply shortages.

“This is a critical message for colleagues overseas. Many things are lacking in our hospital setup, and we pediatricians and neonatologists are especially worried about the shortage of ET tubes to ventilate newborn babies. Stocks would very soon run out,” Kumara said.

Sri Lankan President Gotabaya Rajapaksa declared a state of emergency on April 1 to quell protests over the country’s political and economic turmoil, but he revoked the order five days later.

“As a government, we are clearly saying the president will not resign under any circumstances. We will face this,” Chief Government Whip Johnston Fernando told Parliament on April 6.

Sri Lanka is experiencing its worst economic crisis in decades, with its foreign exchange reserves plummeting by 70 percent in the past two years to about $2.31 billion, leaving it unable to pay for essential imports. The country must also settle a $4 billion debt in 2022.

China has loaned Sri Lanka more than $5 billion over the past decade for the country’s development projects. In December 2017, the Sri Lankan government leased the entire Hambantota Port to China for 99 years to convert its owed loans of $1.4 billion into equity.

The move led to tens of thousands of protesters rallying against the deal. Locals said the government used the Chinese investment for personal benefit rather than for the country’s development, India-based ANI news reported.

While residents living near the Hambantota Port expressed no opposition to China taking over the port, some raised concerns about other villages potentially being sold to China in the future, ANI News reported.

Sri Lanka’s cabinet ministers resigned en masse on April 3 over the country’s economic crisis, prompting Rajapaksa to call on all parties in Parliament to form a unity government.

The International Monetary Fund stated on March 31 that it would soon begin talks with Sri Lanka about a potential financial program.