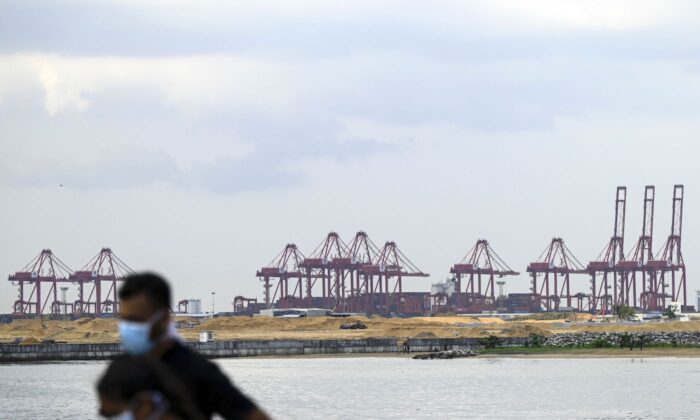 A general view of the Chinese-managed terminal of the Colombo port is seen from the Galle Face promenade in Colombo, Sri Lanka, on Feb. 2, 2021. (Ishara S. Kodikara/AFP via Getty Images)
Asia & Pacific

The president of debt-ridden Sri Lanka has asked China to help restructure billions of dollars in debt repayments as part of a solution to counter the economic fallout from the coronavirus pandemic, the presidential secretariat said on Jan. 9.

During his meeting with visiting Chinese Foreign Minister Wang Yi, Sri Lankan President Gotabaya Rajapaksa told him that “it would be a great relief to the country if the attention could be paid on restructuring the debt repayments as a solution to the economic crisis that has arisen in the face of the COVID-19 pandemic,” Rajapaksa’s office said in a statement.

Rajapaksa also requested that China provide a concessional trade-credit plan for Chinese imports and to assist in enabling Chinese tourists to travel to Sri Lanka under the bio-bubble concept, according to the statement.

Sri Lanka is reported to have to make about $4.5 billion in debt repayments in 2022, starting with a $500 million international sovereign bond repayment on Jan. 18.

The country’s inflation rate hit a record high of 11.1 percent in November 2021, with its food inflation rising to 16.9, according to data released by the Central Bank of Sri Lanka. The increase in prices was triggered by a decline in local currency, which fell by 7.5 percent against the U.S. dollar in 2021.

The government subsequently declared an economic emergency under the public security ordinance and appointed an essential services commissioner to regulate food prices charged by merchants and retailers.

It’s unclear if China has yet to agree to Sri Lanka’s request.

China is deemed to be Sri Lanka’s fourth-biggest lender, behind international financial markets, the Asian Development Bank, and Japan.

Over the past decade, China has loaned Sri Lanka more than $5 billion for highways, ports, an airport, and a coal power plant. But critics say that the funds were used for white elephant projects with low returns, which China has denied.

Sri Lanka is also a key part of Beijing’s Belt and Road Initiative, a long-term plan to fund and build infrastructure linking China to the rest of the world. But other countries, including the United States, have labeled the program as a “debt trap” for smaller nations.

In December 2017, the Sri Lankan government leased the entire Hambantota Port to China for 99 years to convert its owed loans of $1.4 billion into equity, but the move has led to tens of thousands of protesters rallying against the deal.

Former U.S. Secretary of State Mike Pompeo also has warned Sri Lanka about doing business with Beijing, calling the Chinese Communist Party a “predator” that continues to violate sovereignty at land and sea.

“We see from bad deals, violations of sovereignty, and lawlessness on land and sea, that the Chinese Communist Party is a predator, and the United States comes in a different way. We come as a friend and as a partner,” Pompeo said at a 2018 joint press conference in Sri Lanka.

Sunny Chao and Reuters contributed to this report.