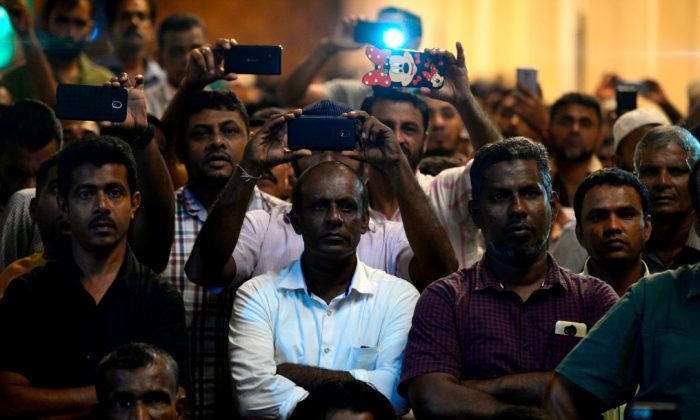 COLOMBO—Sri Lanka appeared to be politically rudderless on Nov. 15 as the speaker of parliament declared there was no functioning prime minister or cabinet after a no-confidence vote the previous day.

His comments came after weeks of political turmoil in the island, off the southeast coast of India, leading to raucous scenes on the floor of parliament on Nov. 15.

Parliament on Nov. 14 passed the no-confidence motion against recently appointed Prime Minister Mahinda Rajapaksa and his government with the backing of 122 of the 225 lawmakers in a voice vote, followed by a signed document.

But President Maithripala Sirisena, in a letter to Speaker Karu Jayasuriya, said he could not accept the no-confidence vote as it appeared to have ignored the constitution, parliamentary procedure, and tradition.

Sirisena, who triggered the crisis by firing Ranil Wickremesinghe as prime minister and naming Rajapaksa to the job late last month, dissolved parliament last week and ordered elections to break the deadlock.

But the Supreme Court ordered a suspension of that decree on Nov. 13 until it had heard petitions challenging the move as unconstitutional.

Soon after his speech, Rajapaksa’s supporters poured on to the floor of parliament and disrupted proceedings. MPs from both sides gathered around the Speaker’s chair, with a lot of shouting and hooting.

The turmoil lasted almost 20 minutes after which Jayasuriya, who failed to bring the house to order, left parliament without making any statement.

TV footage later showed Rajapaksa supporters pulling away the speaker’s microphone, denying him the chance to make a further statement.

After a meeting with party leaders, Jayasuriya’s office said the parliament would be reconvened on Nov. 16.

Allies of Rajapaksa-Sirisena sayWickremesinghe is backed by Western nations, which are interfering in Sri Lankan matters.

Rajapaksa is mostly backed by Buddhists, who make up more than 70 percent of Sri Lanka’s 21 million population, while Wickremesinghe is backed by a cross-section of the community.

Security was beefed up around the parliament and 32 ministries in Colombo on Nov. 15, police said.

Later in the day thousands of Wickremesinghe’s party supporters held a protest in the capital against what they described as the “fake government”.

“This president has ignored the constitution. He has to accept the no-confidence vote held yesterday,” Wickremesinghe told the gathering.

“We are ready to face both presidential and parliamentary polls, but they should be done in line with the constitution.”

Sirisena has faced international criticism for plunging the country into crisis at a time when the economy is growing at its weakest pace in 16 years.

Sirisena has said he fired Wickremesinghe because the prime minister was trying to implement “a new, extreme liberal political concept” and neglecting local people’s sentiment.

But, sources close to the both leaders have said Sirisena’s decision came after Wickremesinghe’s party rejected the president’s request to back him for second five-year term in the 2020 presidency. They had also split over whether to back Chinese or Indian investors in various projects, the sources said.

India and Western countries have requested Sirisena act in line with the constitution while raising concerns over Rajapaksa’s close ties with China. Beijing loaned Sri Lanka billions of dollars for infrastructure projects when Rajapaksa was president between 2005-2015, creating a major debt problem for the country.