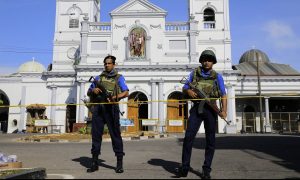 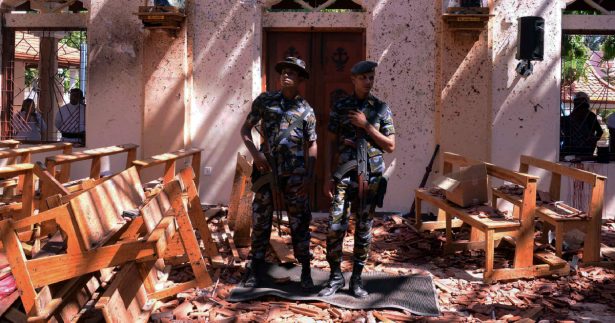 Sri Lankan military stand guard inside a church after an explosion in Negombo, Sri Lanka, on April 21, 2019. (Stringer/Reuters)
Asia & Pacific

COLOMBO—Sri Lankan intelligence officials were tipped off about an imminent attack by ISIS terrorists hours before a series of suicide bombings killed more than 300 people on Easter Sunday, April 21, three sources with direct knowledge of the matter said.

Three churches and four hotels were hit by suicide bombers on Sunday morning, killing 321 people and wounding 500, sending shockwaves through an island state that has been relatively peaceful since a civil war ended a decade ago.

The ISIS terrorist group claimed responsibility for the attacks on Tuesday, without providing evidence of its involvement.

Indian intelligence officers contacted their Sri Lankan counterparts two hours before the first attack to warn of a specific threat on churches, one Sri Lankan defense source and an Indian government source said.

One of the Sri Lankan sources said a warning was also sent by the Indians on Saturday night. The Indian government source said similar messages had been given to Sri Lankan intelligence agents on April 4 and April 20.

Sri Lanka’s presidency and the Indian foreign ministry both did not respond to requests for comment.

Sri Lanka’s failure to effectively respond to a looming Islamist threat will fuel fears that a rift between Prime Minister Ranil Wickremesinghe and President Maithripala Sirisena is undermining national security.

The president fired Wickremesinghe last October over political differences, only to reinstate him weeks later under pressure from the Supreme Court.

Opposing factions aligned to Wickremesinghe and Sirisenahave often refuse to communicate with each other and blame any setbacks on their opponents, government sources say.

Sri Lankan police had been warned weeks ago about possible attacks by a little-known domestic Islamist group, according to an Indian intelligence report given to Sri Lankan state intelligence services, and seen by Reuters.

Sirisena, announcing plans on Tuesday to change the heads of the defense forces, said his office never received the Indian report.

Junior Defense Minister Ruwan Wijewardene, an ally of Wickremesinghe, told Reuters that he was also not privy to the Indian intelligence findings.