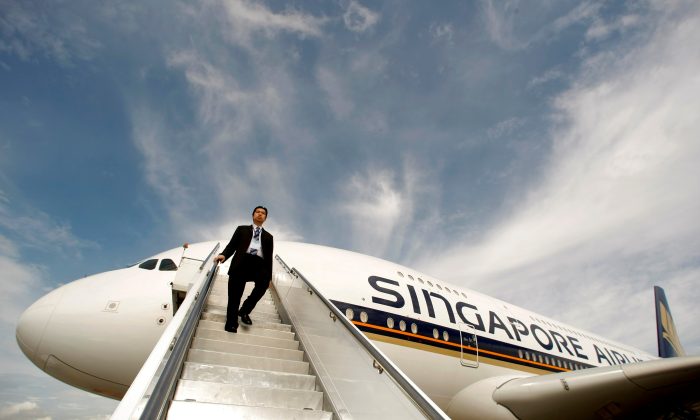 A Singapore Airlines staff member walks down a set of stairs from an Airbus A380 at Sydney International Airport October 26, 2007. (Reuters/Tim Wimborne/File Photo)
Business

Spurned by Airlines, First A380s to Be Stripped for Parts

SYDNEY—A German investment company said on Tuesday it would strip two unwanted Airbus A380 superjumbo passenger jets for parts after failing to find an airline willing to keep them flying following a decision by Singapore Airlines to return them to their owner.

The decision by Dortmund-based Dr Peters Group deals a fresh blow to the European planemaker’s efforts to maintain market interest in the double-decker jet, barely 10 years after it went into service, hailed by politicians as a proud European symbol.

Despite its ample space and excellent reviews for a quiet cabin, demand for the 544-seat jet has crumbled as airlines ditch the industry’s largest four-engined aircraft in favor of smaller but ultra-efficient twin-engined models.

Singapore Airlines launched A380 services in December 2007, but returned the first two aircraft to their German financiers some 10 years later after deciding not to extend their lease.

The two discarded aircraft were flown to Tarbes in the French Pyrenees to be stored, and since then their fate has been uncertain as their owner looked in vain for other takers.

“After extensive as well as intensive negotiations with various airlines such as British Airways, HiFly and IranAir, Dr Peters Group has decided to sell the aircraft components and will recommend this approach to its investors,” the company said in a statement emailed to Reuters.

The planes will not be scrapped entirely, but their huge frames will be combed for valuable components such as landing gears and electronics, a Dr Peters official told Reuters.

Their engines are still useful and have been leased back to their manufacturer Rolls-Royce for use as spares. Dr Peters aims to extend this arrangement, the official added.

U.S. company VAS Aero Services will be responsible for extracting and selling parts, but will do so in Tarbes.

Dr Peters said the deal would yield a positive result for equity investors in the jets. It operates a number of boutique funds said to be targeted at well-off German retail investors.

The planes now in the mortuary are not typical of models in service, experts caution. Early examples of a new type tend to be less efficient and Singapore Airlines recently ordered some new A380s. However, overall demand is thin and Airbus recently agreed to cut production while renewing a search for new buyers.