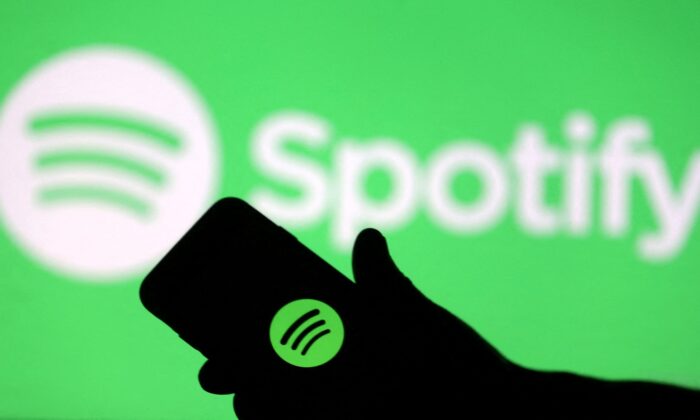 A smartphone is seen in front of a screen projection of Spotify logo, in this picture illustration taken on April 1, 2018. (Dado Ruvic/Illustration/Reuters)
Stocks

Spotify Technology’s shares fell 5 percent on Friday after Joe Rogan’s podcast was briefly not accessible on the company’s streaming platform.

The podcast can now be accessed and Spotify did not immediately respond to a request for comment.

The company has been under fire after Rogan, who signed a $100-million deal with Spotify in 2020, expressed views about COVID-19 on his show that drew protests from artists Neil Young, Joni Mitchell, and India Arie.

Rogan issued a response to claims that his show spread COVID-19 misinformation. However, he noted that two doctors interviewed on his show, cardiologist Peter McCullough and mRNA vaccine contributor Robert Malone, are highly credentialed individuals, and he also questioned what defines misinformation.

Spotify’s Chief Content Officer Dawn Ostroff told advertisers at a conference last week that the backlash around Rogan’s podcast had been a “real learning experience” for the streaming service.

The company’s shares, which have fallen about 59 percent since hitting a record high nearly a year ago, were trading at $151.16 on the New York Stock Exchange.