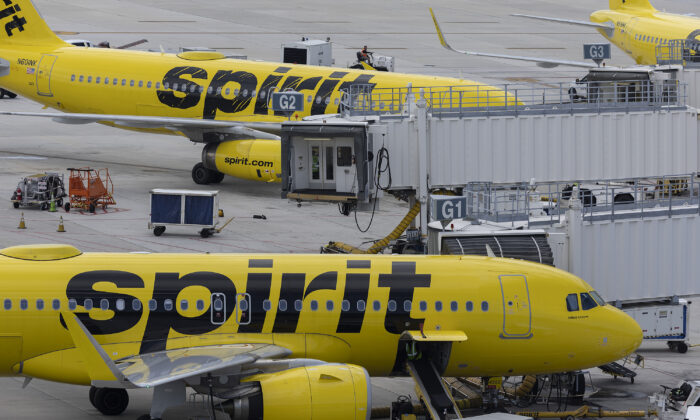 Spirit Airlines planes are prepared for flight at the Fort Lauderdale–Hollywood International Airport in Fort Lauderdale, Fla., on May 16, 2022. (Joe Raedle/Getty Images)
Economy

Spirit Airlines Inc. on Wednesday postponed a key shareholder vote on a proposed deal with Frontier Group Holding Inc. until next week.

This is the second time Spirit has postponed the vote and said the meeting will now reconvene on July 8.

The development comes a day after JetBlue sweetened its offer to buy Spirit, which the latter rejected and instead, recommended shareholders to vote in favor of a merger with Frontier at a meeting on Thursday.

The battle for Spirit began in February with Frontier’s cash-and-stock offer of $25.83 a share. JetBlue entered the bid in early April with an all-cash $33 per share, or $3.6 billion, bid for Spirit.

Spirit called for a shareholder meeting on June 10 to vote on its proposed merger with Frontier, even as JetBlue upped the hostile offer and sweetened the deal.

JetBlue on Wednesday issued a letter to Spirit shareholders ahead of the meeting, saying its cash offer of $33.5 per share was superior and has “a premium of 51 percent to the implied value of the Frontier transaction,” and has greater regulatory commitments, including a larger reverse break-up fee of $400 million.