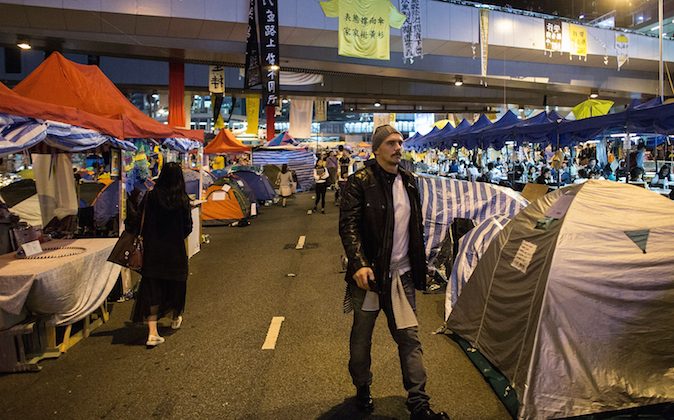 James Franco could have visited the Occupy movement protest site in Hong Kong.

Getty Images photographer Lam Yik Fei managed to snap shots of the American actor, who is known for his role as Harry Osbourne/Green Goblin in Sam Raimi’s Spider-Man trilogy, portraying real-life canyoneer Aron Ralston in 127 Hours, and Saul Silver in Pineapple Express, walking through the Admiralty occupation area and taking photos with his cellphone on Friday, Nov. 21.

It is unclear if the man in Lam’s picture is really Franco or a convincing look-alike. New York Times reporter Alan Wong asked Franco if he was the guy “in a beanie who swung by the Admiralty protest site” and tagged Franco’s official Twitter account, but the actor hasn’t responded yet.

Hey @JamesFrancoTV was that you in a beanie who swung by the Admiralty protest site some 30 minutes ago?

Bk/HK CONNECTION! Thinking about my soul sista, @promanowsky while I wake up in Hong Kong. Brooooooklynnnnnnnnnnn

If Franco really showed up at the Admiralty protest site, he won’t be the first international celebrity to make an appearance.

However, Kenny G took down the Twitter photo after a Chinese official criticized him, and declared on Facebook that he “was not trying to defy (Chinese) government orders” with his post and that he is “not supporting the demonstrators as I don’t really know anything about the situation.”

Kenny G was slammed by netizens for retracting his original statement and was accused of fearing Chinese censorship, which could hit his wallet as his music is immensely popular in China.

Thus, it wouldn’t be too surprising if Franco never reveals that he visited Hong Kong, especially if he wants to avoid being censored.

In response to being targeted by the Chinese regime, Chow, who doesn’t own a car and wears old clothes in public, famously quipped: “I’ll just make less then.”