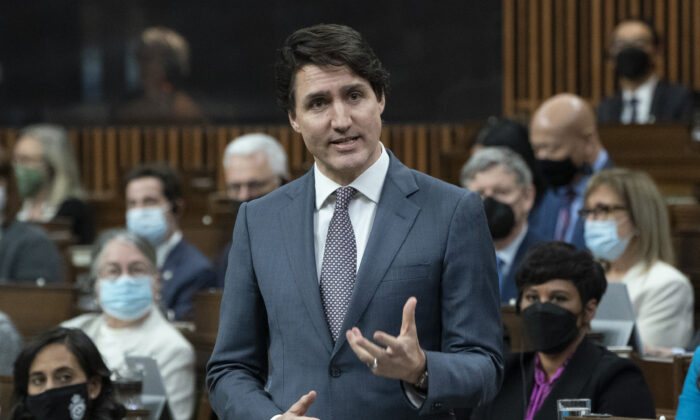 A surveillance plane operated by Canadian special forces flew circles over Ottawa during the Freedom Convoy protest, but the Department of National Defence (DND) and the prime minister say it was part of a training mission unrelated to the demonstrations.

The U.S.-registered 350ER King Air, outfitted with a technology suite to intercept communications and capture high-resolution images, was flying in circles over Ottawa in what a specialist says is a typical surveillance pattern, The Globe and Mail reported  on April 21.

Steffan Watkins, an Ottawa researcher who tracks ships and planes, told the Globe he recorded at least 15 circles over the city, and at times, the aircraft disappeared inexplicably from public tracking systems.

“These patterns look very much like other tracks seen over foreign conflict zones while ISR [intelligence, surveillance, and reconnaissance] missions were believed to be under way,” Watkins said.

The plane was registered in the United States since Canada has yet to take delivery of the three units it purchased for a total price tag of $247 million. The aircraft are to be provided to the Canadian Special Operations Forces Command (CANSOFCOM).

DND told the Globe the flight was unrelated to the Freedom Convoy protest.

“The flight in question was part of a Canadian Armed Forces training exercise that was planned prior to, and was unrelated to, the domestic event that was taking place at the time,” said spokesperson Daniel Le Bouthillier.

“This training had nothing to do with the surveillance or the monitoring of activities.”

Jan. 28 was the day when the Freedom Convoy trucks coming from across the country started arriving in Ottawa to demand the lifting of COVID-19 restrictions.

Part of the justification the government used in invoking the Emergencies Act in response to the protest were claims that protesters were “largely foreign-funded” and wanted to overthrow the government. Testimony from parliamentary committees studying the measures in recent months revealed the movement was largely funded by Canadians, and the Freedom Convoy protest in Ottawa was peaceful.

CANSOFCOM is responsible for military units that can intervene on Canadian soil or abroad to deal with terrorist or hostage-taking incidents, and incidents involving biological, chemical, radiological, and nuclear threats.

DND cannot collect information on Canadians without special authorization from the government, and Conservative MPs raised the issue during question period on May 4.

“The government must invoke the National Defence Act to use the military for civilian law enforcement … Did the government invoke any statute to deploy the Canadian Armed Forces in this manner? Or was the surveillance conducted without lawful authority?” asked MP Cheryl Gallant.

Prime Minister Justin Trudeau said the flight was a pre-planned training exercise and made a counter-accusation against Gallant.

“What the official opposition is playing with right here is dangerously close to misinformation and disinformation, when they choose to make political hay out of something that could be concerning to many people if it were true, but it’s simply not,” Trudeau said.

“And I think it’s important and it behooves all of us in this House to demonstrate responsible leadership in how we move forward here.”

Conservative defence critic Kerry-Lynne Findlay pressed Trudeau on the issue, expressing disbelief that Canada’s Armed Forces were “just in training” over Ottawa at the same time as the trucker protests. She said the apparent surveillance “contradicts everything the government has said to date.”

“Liberals didn’t put soldiers on our streets, but they did put them in the air. How can the Prime Minister justify using military assets to surveil Canadians?” Findlay said.

Trudeau again said this was “dangerously close to misinformation and disinformation designed to gin up fears and conspiracy theories.”

As Trudeau finished speaking and sat down, he reportedly cursed at Findlay, which led Conservative MP John Barlow to seek an apology from Trudeau during a point of order after question period.

“All of us in this House are used to vigorous debate during Question Period, but there is a line that should not be crossed, especially when it comes to unparliamentary language,” Barlow said.

Asked about the incident by reporters after question period, Trudeau declined to comment but made reference to a phrase used by his father, Pierre Elliot Trudeau, who famously mouthed an expletive decades ago when he was Prime Minister.