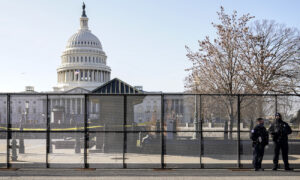 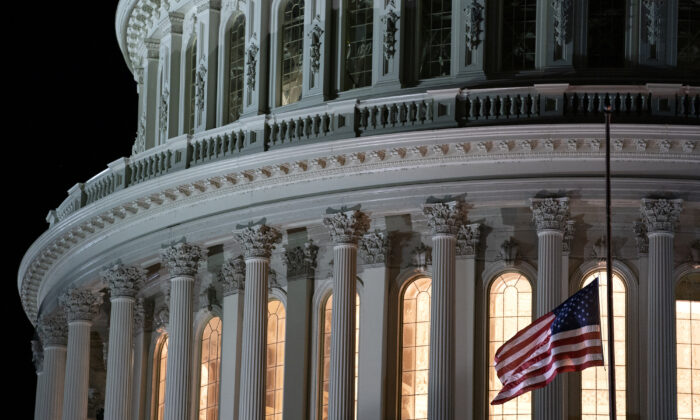 The American flag is flown at half-staff at the U.S. Capitol on Sept. 21, 2020. (Stefani Reynolds/Getty Images)
Crime and Incidents

House Speaker Nancy Pelosi (D-Calif.) ordered flags on Capitol Hill to fly at half-staff in honor of Brian Sicknick, the officer who died because of an injury sustained while protecting the Capitol building from protestors on Wednesday.

“I have ordered the flags at the Capitol lowered to half-staff in Officer Sicknick’s honor. The sacrifice of Officer Sicknick reminds us of our obligation to those we serve: to protect our country from all threats foreign and domestic. May it be a comfort to Officer Sicknick’s family that so many mourn with and pray for them at this sad time,” said Pelosi.

Sicknick was a U.S. Capitol Police (USCP) officer who died around 9:30 p.m. on Thursday night due to injuries sustained while responding to the storming of the Capitol.

“On behalf of the House of Representatives, I send our deepest condolences to the family and loved ones of Officer Brian Sicknick, who died after defending the Capitol complex and protecting those who serve and work here. The perpetrators of Officer Sicknick’s death must be brought to justice,” said Pelosi.

In a public statement, the USCP said that it “expresses its deepest sympathies to Officer Sicknick’s family and friends on their loss, and mourns the loss of a friend and colleague.”

His death will be investigated by D.C. Police Department’s Homicide Branch, the USCP, and its federal partners.

Pelosi said the attack was an insurrection, on “our temple of American Democracy, and its workers was a profound tragedy and stain on our nation’s history.” Adding that due to the heroism of first responders like Sicknick and the determination of lawmakers, “we were not, and we will never be, diverted from our duty to the Constitution and the American people.”

Other lawmakers took to Twitter Friday to honor Sicknick and condemn the attack on the Capitol.

Rep. Don Beyer (D-Va.) said in a statement,” Officer Brian Sicknick, my constituent, was 42 years old, a military veteran who served in the U.S. Capitol Police for 12 years. He made the ultimate sacrifice while protecting those trapped in the Capitol amid a violent assault on our democracy itself. He deserves to lie in state.”

Senator Lisa Murkowski (R-Alaska) called the officer a part of a “work family.”

“It is heartbreaking that officer Brian Sicknick was killed defending the U.S. Capitol from a violent mob. Our Capitol police are part of our work family.”

Senator Tim Scott (R-N.C.) said, “He lost his life defending democracy, and we will never forget his sacrifice and heroism.”