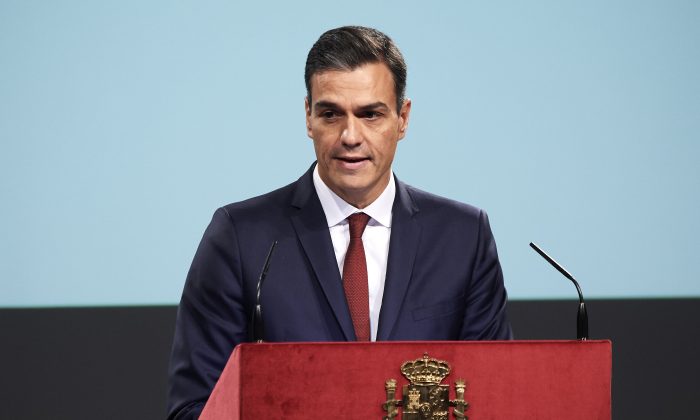 Prime Minister Pedro Sanchez attends the reading of the Spanish Constitution for the 40th anniversary of its approval by the Congress at the Cervantes Institute in Madrid, Spain, on October 31, 2018. (Carlos Alvarez/Getty Images)
Europe

MADRID—Prime Minister Pedro Sanchez’s Socialists may lose control of the southern Spanish region of Andalusia after the center-right Ciudadanos party on Monday ruled out any coalition with them after an inconclusive election.

Although the Socialists topped the poll, their position severely weakened in a region that they have governed since the end of Francisco Franco’s dictatorship while ultra-conservative Vox party won 12 seats.

Ciudadanos’ candidate Juan Marin rejected a coalition with the Socialists and said during an interview on national radio that he would present himself to lead the region after his party won 21 seats in the 109 seat parliament.

“We won’t support a government of [regional Socialist leader] Susana Diaz or with the Socialist party. They’ve lost the confidence of the Andalusia people and so that possibility doesn’t exist,” Marin said.

The Socialists took national leadership in June after a winning a vote of no-confidence against the previous conservative People’s Party [PP] government following a slew of corruption charges.

However, Prime Minister Sanchez rules the country with a minority government that has struggled to garner opposition party support to pass any meaningful laws since taking power, including next year’s budget.

Sanchez has said he aims to take the legislature through to 2020, though Sunday’s upset will fuel calls for him to call an early national election.

In Andalusia, the Socialists took 33 seats—not enough to form a government without a coalition—the conservative People’s Party [PP] 26 while the left-wing Adelante Andalusia won 17 seats.