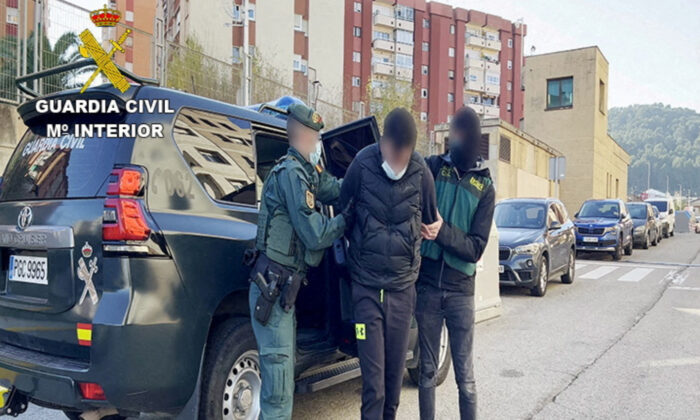 Members of the Spanish Civil Guard during the raid to arrest internationally wanted drug trafficker Fikri Amellah and 16 people from his network in Barcelona, Spain, on Dec. 17, 2021. (Guardia Civil-Ministerio del Interior/Handout via Reuters)
Europe

MADRID—Spanish police said on Friday they had arrested an internationally wanted drug trafficker suspected of using the proceeds from importing tonnes of hashish and cocaine to splash out on luxury cars, yachts and high-end watches.

After a two-year investigation, Moroccan national Fikri Amellah was arrested in a dawn raid on his Barcelona apartment on Tuesday in a joint operation with French and Belgian police, the Guardia Civil police force said.

Guardia Civil footage showed heavily armed officers breaking down doors in Barcelona and searching a luxury riverside apartment alleged to be connected to the network.

Amellah is accused of running one of the largest wholesale hashish operations in Spain and was beginning to muscle in on the more lucrative cocaine trade, the force said, adding that he was suspected of importing 4.3 tonnes of hashish, and 1.8 tonnes of cocaine this year.

Although he lived in a modest apartment in Barcelona’s Poble Sec neighborhood, police seized around 1 million euros ($1.13 million) in cash, 3 million euros ($3.38 million) of jewelry and 10 luxury cars.

Another 16 people from the network were detained in Barcelona, Galicia and Andalusia. All but three were been remanded in custody.