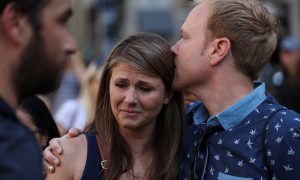 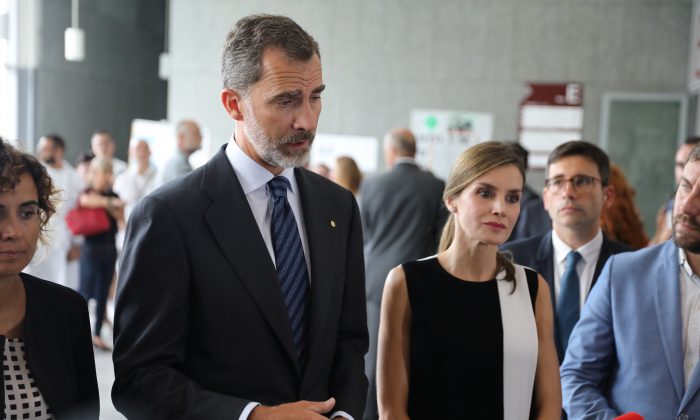 BARCELONA/RIPOLL, Spain—Spanish police were on Saturday searching for the driver of a van that plowed into a crowd in Barcelona, killing 13 people, in one of two deadly attacks in Catalonia carried out by a network of suspected Islamist terrorists.

(For a graphic of the Barcelona attack, click here)

The van driver has yet to be identified, police in the northeastern Spanish region said late on Friday, but said it seemed increasingly unlikely that he was one of five suspects shot dead in a Catalan seaside resort.

The driver abandoned the van and fled on Thursday after speeding along a section of Las Ramblas, the most famous boulevard in Barcelona, leaving a trail of dead and injured among the crowds of tourists and local residents.

Another woman died after a car rammed passersby in the resort town of Cambrils in the early hours of Friday, before police shot dead five attackers who were wearing fake explosive belts and had an ax and knives in the vehicle.

Police have arrested four people in connection with the attacks – three Moroccans and a citizen of Spain’s North African enclave of Melilla.

Another three people have been identified but are still at large. Spanish media said two of them may have been killed in Alcanar, where a house was razed by an explosion shortly before midnight on Wednesday, while one suspect, named by El Pais newspaper as Younes Abouyaaqoub, was still sought by police.

Spanish police declined to confirm his identity. They believe the house in Alcanar was being used to plan one or several large-scale attacks in Barcelona, possibly using a large number of butane gas canisters stored there.

More than 100 people were injured in the Las Ramblas attack, many of them foreign tourists visiting Barcelona during the peak of the summer season.

In the past 13 months, terrorists have used vehicles as weapons to kill nearly 130 people in France, Germany, Britain, Sweden and Spain.

The Spanish government will decide on Saturday whether to raise its security alert one notch to the maximum level, which could involve armed forces being deployed to help patrol cities and vulnerable areas.

The Mediterranean region of Catalonian is thronged in the summer months with tourists drawn to its beaches and the port city of Barcelona’s museums and tree-lined boulevards.

Of the 14 dead in the two attacks, five are Spanish, two are Italians and there is one Portuguese, one Belgian, one Canadian and one U.S. citizen, emergency services and authorities from those countries have confirmed so far.

Spain’s King Felipe and Queen Letizia were due to visit the injured—who are of many different nationalities ranging from France and Germany to Pakistan and the Philippines and are in various Barcelona hospitals—on Saturday.

By Andrés González and Angus Berwick