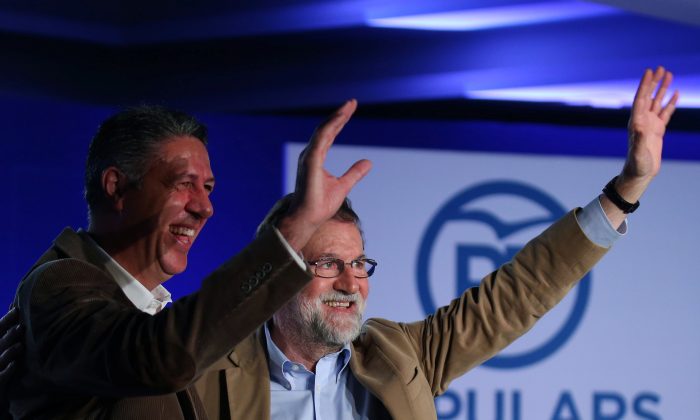 BARCELONA—Prime Minister Mariano Rajoy urged Catalans to turn out in force in a December election to “restore normality” to a region buffeted by attempts to split from Spain.

In his first visit to Barcelona since Madrid imposed direct rule on Catalonia and sacked its separatist leaders, Rajoy said the Dec. 21 election would safeguard the economy and stop companies moving out of the economically important region.

“We want a massive turnout to begin a new political era of tranquillity, normality, coexistence and respect,” Rajoy told the Catalan wing of his conservative People’s Party (PP).

“We must urgently bring back normality to Catalonia … to reduce social tension and stop damage to the economy.”

Despite opposition to the early election imposed by Madrid as a way to resolve the impasse, the two leading pro-independence parties, PDeCAT of deposed leader Carles Puigdemont, and the ERC, have said they will participate.

However, they failed to agree to run on a united ticket, potentially harming the separatist camp’s chances of winning a majority in the regional parliament.

The far-left pro-independence CUP party, whose support was key to Puigdemont’s government, decided on Sunday to run in the upcoming election.

Madrid’s imposition of direct rule on Catalonia has widened a rift between political parties both in regional politics and at the municipal level.

On Sunday, the party of Barcelona Mayor Ada Colau voted to break its pact to govern with the Catalan Socialist Party (PSC), citing the latter’s support for the application of direct rule.

Some 54 percent of Spaniards evaluate positively Madrid’s handling of the Catalan crisis, but only 28 percent of Catalans share this view, according to a poll for newspaper El Pais.

On Saturday, 750,000 people marched in Barcelona to call for the release of separatist leaders from pre-trial detention.