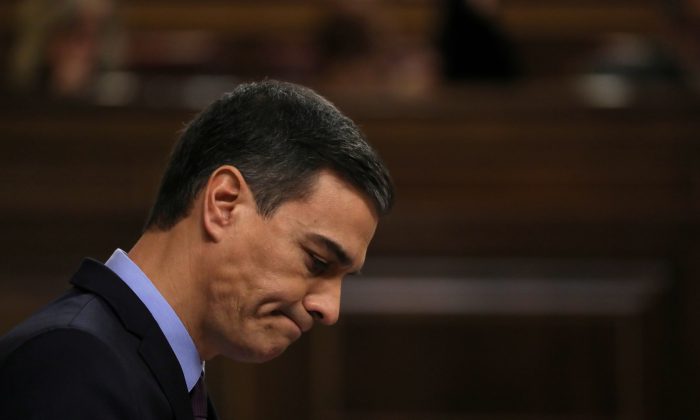 MADRID—Spanish Prime Minister Pedro Sanchez said on Dec. 12 he would stand firm against what he called “inflammatory” Catalan separatist rhetoric, hardening his stance towards the region and upping the stakes in a broader political game.

Sanchez has adopted a more open approach towards Catalonia’s pro-independence leaders than his conservative predecessor Mariano Rajoy, ousted in a no-confidence vote in June and whose government took control of the region for several months after it unilaterally declared independence in October 2017.

But a deepening polarization within Spain over matters of regional autonomy on Dec. 2 cost Sanchez’s Socialists votes in an election in Andalusia, one of its traditional regional strongholds, that in turn highlighted the risk of an early national election.

The Socialists control fewer than a quarter of seats in the Madrid parliament and need the support of smaller parties, including Catalan nationalists, to pass legislation, in particular the 2019 budget.

The Dec. 12 speech was closely watched for signs of whether Sanchez would make concessions to Catalan separatists to secure their backing for the budget and help him stay in office for the rest of a parliamentary term due to run until 2020.

But he took no such step.

“Over the past few days we have heard, from some of the leaders of the independence movement, an unacceptable inflammatory rhetoric,” Sanchez told lawmakers.

Speaking in Brussels on Dec. 8, the head of Catalonia’s pro-independence government Quim Torra praised what he called “the Slovenian way” to independence.

Slovenia declared independence in June 1991, prompting a 10-day war against the Yugoslav army in which 64 people died.

Sanchez also said that national police could be sent to Catalonia if local authorities did not do more against protests like one that shut down highways during the weekend.

The conservative Partido Popular (PP) and center-right Ciudadanos said the speech was too soft.

“You have said absolutely nothing on Catalonia,” PP chief Pablo Casado said. “You can’t say anything as you depend on their votes [for the government] to survive.”

Analysts said the Socialists’ fiasco in Andalusia, where the right-wing Vox also made an unexpected breakthrough, was partly due to anger with Sanchez’s overtures to Catalonia.

“The government is toughening its stance, it seems it has understood that its position on territorial issues has cost it votes,” said Pablo Simon, a political science professor at Madrid’s Carlos III university.

The issue may well come to a head in January, when Sanchez brings the 2019 budget proposal to parliament.

If that fails to pass, he could be forced to call an early election, though he would be able to do so while saying he has not yielded to separatists’ demands, analysts say.

“The question [for an early election] is not so much when as why. It can be a good argument to say they wanted to push the budget through to implement their policies but couldn’t for lack of support,” Simon said.