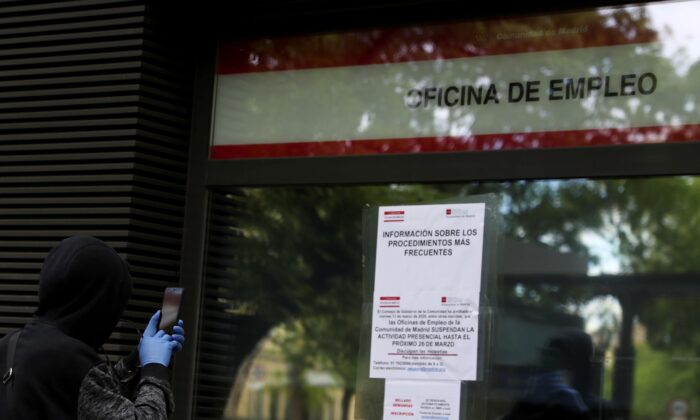 A man wearing protective gloves takes pictures of an information board outside a government job center closed for the public during the coronavirus disease (COVID-19) outbreak in Madrid, Spain on April 28, 2020. (Susana Vera/Reuters)
Economy

MADRID—Spain’s labour market remained resilient in October, official data showed on Wednesday, with joblessness edging lower and job creation surging in a month usually marked by rising unemployment at the end of the summer tourist season.

The hospitality sector led job creation, accounting for just over 25,000 of the 102,474 positions added over the month, Social Security Ministry data showed, continuing a hiring spree at bars and restaurants seen in the third quarter.

Some 4.7 million foreign travellers visited in September, up four-fold from last year but around half pre-pandemic levels, with numbers continuing to hold up later into the season as restrictions also ease elsewhere making holidays more appealing.

“We expect this trend to continue to accelerate over the course of November,” she said, adding that employment had recovered to pre-pandemic levels.

The number of registered jobseekers edged down 0.02 percent from September, Labour Ministry data showed, slowing sharply from previous months’ declines but marking the first time unemployment has fallen in October since 1975.

By sectors, joblessness fell in services, construction and industry but jumped by 5.1 percent in agriculture, the data showed.

Overall, some 3.26 million people remain out of work, about 570,000 fewer than a year ago. Third-quarter jobs data released last week showed more than 20 million people were working in Spain for the first time since 2008.

Third-quarter economic growth missed expectations after a weak second quarter and inflation is at its highest rate in three decades, potentially jeopardising the government’s target to return to pre-pandemic output levels by the end of the year.