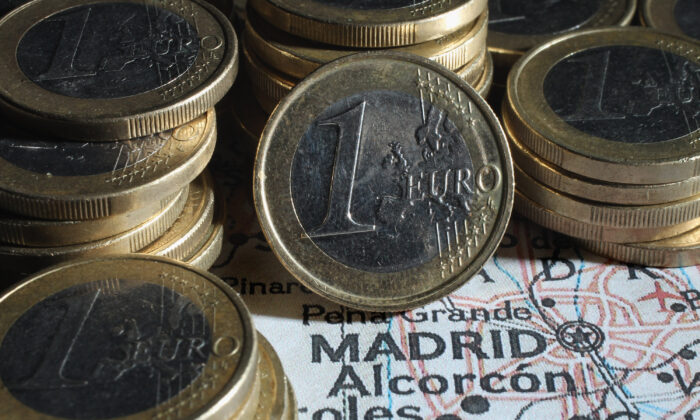 In this photo illustration columns of one-euro coins stand on a map of Spain next to Madrid in Berlin, Germany, on Aug. 6, 2012. (Sean Gallup/Getty Images)
Economy

Inflation levels in Spain surged to a 13-year-high in September driven by increasing energy costs, among other things, data from the National Statistics Institute (INE) showed on Wednesday.

The flash indicator prepared by the INE (pdf) showed that national consumer prices rose 4.0 percent year-on-year, the highest reading since September 2008, when the rate was 4.5 percent.

The increased inflation levels are mainly attributed to rising electricity prices, although tourist packages prices falling more in 2020 than this year, and the cost of fuel and oil for personal vehicles rising also play a role, according to INE.

Spain is just one of several European countries facing soaring energy bills as gas prices have risen more than 35 percent in the past month amid lower supplies and a surge in demand as pandemic-hit economies around the world reopen, prompting fears that there is simply not enough gas stored up for the winter if temperatures were to be particularly cold in the northern hemisphere.

In Europe, supply levels are 16 percent below the five-year average, a record low for this time of year.

Spain’s government confirmed Sept. 14 that it will introduce a series of short-term temporary “shock measures” in an effort to cut spiraling energy bills.

The measures intend to bring “an immediate halt to the effect that the electricity price is having on other sectors of the economy,” it said in the State Gazette.

Such measures include limiting the profits that hydropower and other renewable power generators can make from surging electricity prices, and redirecting billions of euros to consumers.

The government said it expects to channel some 2.6 billion euros ($3.07 billion) from companies to consumers in the next six months and the measure will stay in place until the end of March, when natural gas prices are expected to stabilize.

The country will also use an extra 900 million euros it expects to raise from sales through auctioning carbon emission permits this year to reduce bills, which will also be allocated to reduce consumer bills. The government cited high market prices as the reason for the additional funds.

Spain will also limit regulated price increases for natural gas at 4.4 percent in the third quarter, versus forecasts for a 28 percent increase.

Elsewhere, the INE data showed that the annual rate of Spain’s Harmonised Index of Consumer Prices rose by 4.0 percent in September up from 3.3 percent in August, signifying a 13-year record.

The latest INE report comes as the OECD said it expects consumer prices in leading economies, including the United States, to rise faster than previously anticipated before settling at above pre-pandemic levels.

The headline rate of consumer price inflation is projected at 3.7 percent in 2021 on average in the Group of 20 leading economies, before rising to 3.9 percent in 2022, the Paris-based organization said in its September economic outlook (pdf).