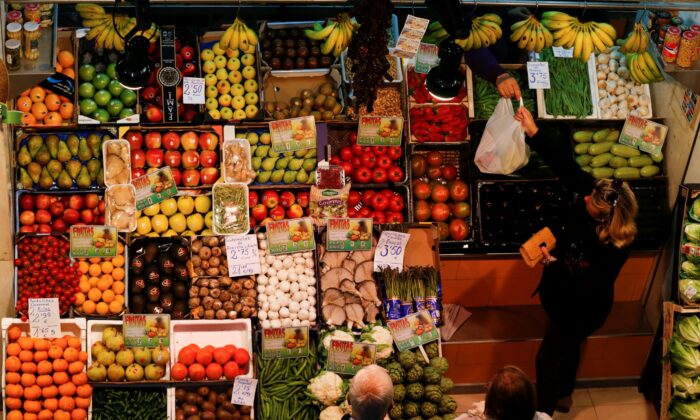 A woman buys in a fruits and vegetables shop at a food market in the Andalusian capital of Seville, southern Spain, on March 7, 2016. (Marcelo del Pozo/Reuters)
Economy

MADRID—Spanish 12-month inflation rose to 10.2 percent in June, the first time it has surpassed 10 percent since April 1985, from 8.7 percent in the previous month, preliminary data from the National Statistics Institute (INE) showed on Wednesday.

The reading was higher than the 9.0 percent forecast by analysts in a Reuters poll.

Core inflation, which strips out volatile food and energy prices, rose to 5.5 percent year-on-year from 4.9 percent a month earlier, the highest since August 1993, the INE data showed.

Spanish European Union-harmonised inflation was 10.0 percent in the 12 months through June, up from 8.5 percent a month earlier.

In Spain, INE said, this evolution in prices is mainly due to the rise in fuel prices, bigger this month than in June 2021, and of food and non-alcoholic beverages, which were flat in June last year.

Also influencing the increase in national consumer prices are the costs of hotels, cafes and restaurants, which all rose from last year, INE said.

The soaring cost of living in Spain is putting pressure on the government of Prime Minister Pedro Sanchez, which passed on Saturday a second series of measures, worth 9 billion euros ($9.45 billion), to help poor households cope with inflation.

Rising consumer prices “show the severity of the situation and the measures we are taking are appropriate,” Sanchez said on Wednesday morning on local radio station Cadenza SERA.