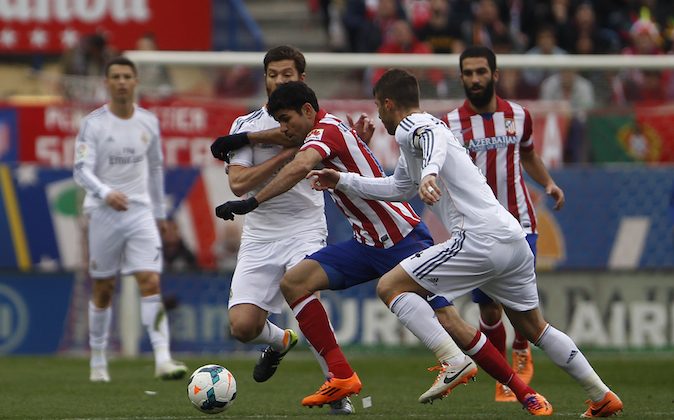 The Spain vs Italy soccer international friendly match is set for Wednesday, Mar. 5.

The game will be broadcast live by TeleCinco Espana in Spain and RAI Uno in Italy.

The game will also be broadcast on ESPN2, ESPN3, and ESPN Deportes in the United States.

Below is an AP article on the game:

5 Things to Know About Spain-Italy Friendly

Respective coaches Vicente del Bosque and Cesare Prandelli are sampling their options for the World Cup in three months. Here are five things to know about the match between the Mediterranean rivals:

DIEGO COSTA, FINALLY: Diego Costa will make his long-awaited Spain debut after months of buildup since he spurned the chance to play for his native Brazil. Diego Costa, who is a naturalized Spanish citizen, will get to debut on his Atletico Madrid home field, and provide a glimpse into a somewhat new-look Spain, which has always relied on finesse and intelligence. It can add the striker’s strength and grit to a team that may need some extra backbone in Brazil this summer. Del Bosque is obviously not concerned about relations inside the team despite Diego Costa and Spain teammates Sergio Ramos and Xabi Alonso of Real Madrid having enjoyed some tense tats in Spanish league play.

NEW-LOOK SPAIN? Diego Costa’s arrival will give the world champions a new dimension and opponents more headaches in trying to unlock their tactics. Italy knows about this all too well after being routed 4-0 by Spain in the 2012 European Championship final. Del Bosque has left out key regulars Fernando Torres, David Villa and midfielder Juan Mata. With Diego Costa and Alvaro Negredo, Spain has a pair of physical forwards who can exploit open space on the counter and create with their imposing styles. After using tiki-taka to triumph in South Africa, and a “false nine” in Poland and the Ukraine, Del Bosque will likely have something new to present world football in South America.

CESAR’S SPOT TO LOSE: The game against Italy will also provide Del Bosque with better clarity in choosing which defenders to employ come Brazil. Gerard Pique is missing against Italy due to injury, but the Barcelona center back and Ramos look certain to start in the center of defense. Javi Martinez’s emergence gives the Spain coach options in the middle of the defense, too. Jodi Alba is a lock at left back, but the right back position appears be there for the taking: Regular Alvaro Arbeloa was dropped against Italy in favor of Chelsea back Cesar Azpilicueta. Atletico back Juanfran Torres will also compete for the spot.

CODE OF ETHICS: Prandelli is sticking to his code of ethics, even if that means dropping key midfielder Daniele De Rossi. De Rossi was left off the Azzurri squad after punching an opponent while playing for Roma in a 0-0 draw with Inter Milan on Saturday. The referee did not punish De Rossi but the player received a three-match ban from the Serie A judge on Monday. “We have a code of ethics which we established by looking everyone in the eyes,” said Prandelli, who dropped De Rossi even before he was banned. “At the World Cup we need to present ourselves ready also from the behavioral point of view. I don’t want to arrive there and find ourselves playing with 10 men.”

NEW KITS: Italy will debut its new World Cup kits. The specially designed Puma shirts feature micro-massage taping laced into the fabric to “provide players with a faster, more effective energy supply to the active muscles.” Puma says the home and away shirts “feature ACTV tape that is strategically placed within the garment to provide micro-massages on the skin, working with the human body to help maximize performance.” The blue shirts feature thin collars that open at the neck with white lines down the sides. The white shirts — which Italy is expected to wear vs. Spain — have closed necks and grey pinstripes.