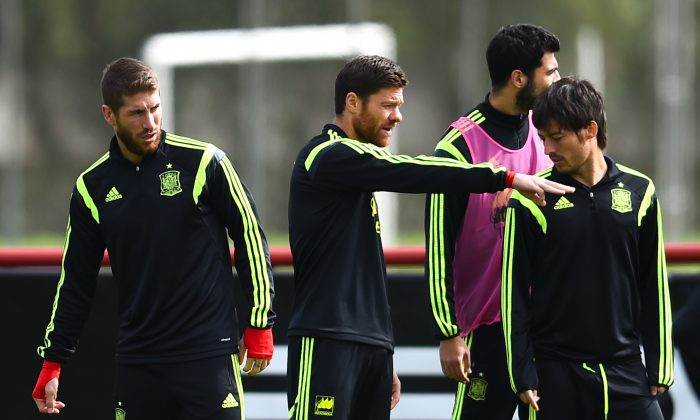 Xabi Alonso (C) of Spain chats with his teammates Sergio Ramos (L) and David Silva of Spain during a Spain training session at Centro de Entrenamiento do Caju on June 21, 2014 in Curitiba, Brazil. (Photo by David Ramos/Getty Images)
Soccer

Australia and Spain will go head-to-head in a World Cup 2014 Group B match on Monday, June 23.

Here are odds to win for the game.

CURITIBA, Brazil (AP) — Spain will take on Australia in its final Group B match Monday in the knowledge that defeat will officially make its defense of the World Cup the worst in history.

Following two straight defeats for both teams, neither can qualify for the knockout stages of the World Cup.

But Spain in particular has something to play for, despite having already made history of the wrong kind. It is the first defending champion in modern times to be eliminated after two matches, following a 5-1 drubbing at the hands of the Dutch and a 2-0 defeat to Chile. In 1934 Uruguay did not defend its trophy while in 1950 Italy failed to get through a three-team group despite winning a match.

On Monday, Spain will seek to avoid notching up another negative milestone.

No defending champion has ever exited a tournament without securing a single point. France came closest in 2002 when it came last in its group, having only managed to draw one of its games in its goalless campaign in South Korea.

Following a six-year period of domination which has seen it win two straight European Championships as well as the World Cup in South Africa in 2010, Spain’s woes at the World Cup have come as huge surprise.

Many of the players that took the field in the opening two games are likely to be on the bench at the Arena da Baixada in the southern city of Curitiba.

In the wake of the Dutch thrashing, coach Vicente del Bosque already rang the changes in the second match against Chile when he dropped Xavi Fernandez and Gerard Pique from the start. Koke , for one, is expected to play against Australia, after he replaced Xabi Alonso in the Chile game.

Striker Fernando Torres, who has been a part of Spain’s success in recent years, said the players want to finish with a win as the team rebuilds ahead of the 2016 European Championship in France.

“We didn’t show our strengths in the first two games and now we have the chance against Australia,” said Torres. “We’re expecting a real tough game. It’s our last chance to win a game at this World Cup and to go back to Spain with three points and show everyone we have a lot of football for the future.”

The future of the Spanish national side remains uncertain. Though the Spanish Football Federation has indicated that it wants del Bosque to remain in place during the rebuilding, it’s uncertain whether the 63-year-old coach has the inclination to carry on.

For Australia, despite its two defeats, the World Cup can be viewed in a far more positive light.

Following a lackluster loss to Chile, Australia pushed the Netherlands during its narrow 3-2 loss. Australia will be without the suspended Tim Cahill, whose 20-yard left-footed volley against the Dutch could end up being the goal of the tournament.

“We came here to play football, and as a nation I think we have earned the respect of the world,” Cahill said. “I’m proud of this team, the kids. It’s one of the best soccer teams I have ever been a part of.”