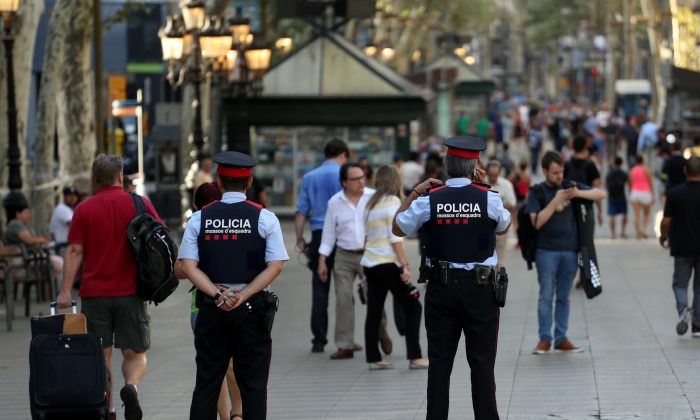 Spain to Review Police Response to Barcelona Attack Amid Questions

BARCELONA—Regional police in Spain may have missed an opportunity to uncover a terrorist plot ahead of last week’s deadly Barcelona attack due to procedural errors and a lack of communication among investigators, two police sources and two individuals close to the investigation said.

The errors and miscommunication centered around a major blast on Aug 16, the eve of the attack, at a house where suspected Islamist terrorists were making explosives, the sources said.

For several hours, Catalan police did not link the explosion to militancy and so no public alarm was raised, before an accomplice drove a van into crowds in Barcelona, killing 13 people in Spain’s deadliest attack in more than a decade.

Catalan police, the Mossos d’Esquadra, also took 10 hours to send bomb experts to the scene of the explosion in a town about 200 km (125 miles) southwest of Barcelona, the region’s capital, delaying the discovery of the terrorist cell, the sources added.

The sources declined to be identified because of the sensitivity of the issue or because they were not authorized to speak to the press.

A judicial source said that, as part of the investigation into the attacks, police would look at whether a lack of coordination or information-sharing had contributed to the delay in discovering links between militancy and the explosion.

The source said police needed to complete the investigation before reaching any conclusions about possible errors.

Mossos chief Josep Lluis Trapero told reporters on Monday that it was unfair to criticize his force with the benefit of hindsight.

“Now, with all the information that we have, yes, it is easier to make the link, but that’s playing dirty and it deceives people,” Trapero told a news conference.

In response to Reuters questions about the agency’s handling of the attack, a spokesman for the Mossos declined to comment and referred to Trapero’s comments at the press briefing.

According to the Mossos, another suspected member of the bomb-makers’ terrorist cell, 22-year-old Younes Abouyaaqoub, had begun to mow down pedestrians in the central walkway of Barcelona’s most famous avenue, Las Ramblas, at around the time bomb experts determined the real cause of the blast.

A bomb squad should be called immediately to the scene of such an incident given the possibility it could be linked to terrorism, a judicial source said.

The Mossos also did not promptly pass information on the blast to the national police and to Madrid’s Civil Guard, viewed as Spain’s most experienced anti-terrorism force, said sources from both police forces.

Despite the criticism, Spanish and Catalan authorities have publicly praised the Mossos for its response to the attacks.

All of the known suspects are now arrested or dead, with police on Monday killing the van’s driver, Abouyaaqoub, after four days on the run.

The head of Catalonia’s regional government also praised the service.

“I want to thank the Mossos d’Esquadra for their efficiency. They’ve shown great professionalism, in close coordination with the rest of Catalonia and the state’s security forces,” Carles Puigdemont said after Abouyaaqoub was killed.

Local Pride in the Mossos

The sources said the Mossos normally coordinated efficiently with the national police, barring occasional minor problems, and could not explain why these procedures had not been followed.

The Mossos has said it first suspected a gas leak or narcotics laboratory was to blame for the blast, which tore through the house near midnight. Police had noticed butane gas cylinders and acetone, a compound used in laboratories to produce drugs.

Some terrorism experts have speculated that if the Mossos had discovered the presence of terrorists at the house in Alcanar more quickly, it might have had time to raise the alarm and perhaps even foil the van attack in Barcelona.

Salvador Burguet, chief executive of Spanish intelligence firm AICS, which works with anti-terrorism authorities in several countries, said police “could have linked the explosion with an Islamist terrorist cell.

“But that didn’t happen, and they lost a lot of time,” said Madrid-based Burguet, adding that his remarks were based on information he gathered from his own police sources.

Had police immediately sent the bomb squad to the Alcanar house, Burguet said, they would have quickly detected signs of ISIS’s signature explosive, TATP, and the coffee filters used to strain the solution.

The Mossos says it now believes explosives accidentally ignited, killing two of the three terrorists inside the house.

They belonged to what police have said was a 12-member cell which decided after the explosion on a less elaborate attack than the one they were apparently planning: drive a rented van into the Las Ramblas crowds and stage a similar attack in the coastal resort of Cambrils, south of Barcelona.

On Tuesday, a Spanish judge ruled that one of the four arrested suspects be released on certain conditions, while another remain in police custody pending further investigation. The judge jailed the other two.

In Cambrils, a car rammed passers-by and its occupants got out and tried to stab people. The five assailants, who were wearing what turned out to be fake explosive belts, were shot dead by police. A Spanish woman was killed in that attack.

ISIS, the terrorist group under siege in Syria and Iraq, claimed responsibility for both attacks, although its direct involvement has yet to be established.

Catalonia’s government, which plans to hold a referendum on independence in October, says the Mossos are capable of acting effectively without the central government’s help.

In the past, Catalonia’s government and police have bristled at the fact that the Mossos has been excluded from international meetings on terrorism because they are not a national force.

Since the attack, the Catalan and national governments have sought to put aside the issue of independence to present a united front, although a day after the attack, national and Catalan authorities held separate crisis meetings.

Barcelona residents have expressed pride in the Mossos, sometimes applauding uniformed officers spontaneously in the street. The Mossos officers will lead an anti-terrorism demonstration on Saturday in place of Catalan politicians.

By Angus Berwick and Julien Toyer