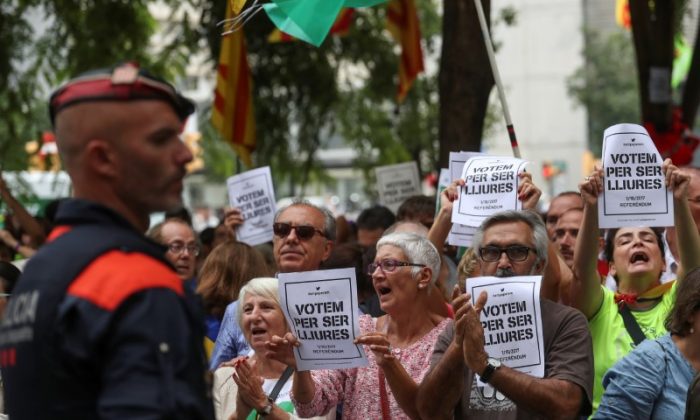 People shout slogans and hold up posters reading, "Vote to be free", referring to voting in the banned October 1st independence referendum, as protesters gather in support of Catalan officials that were arrested in raids on government offices, outside a courthouse in Barcelona, Spain on Sept. 22, 2017. (REUTERS/Susana Vera)
Europe

MADRID—Spain will send more state police to Catalonia to block any moves to hold a banned independence referendum, the interior ministry said on Friday.

The government in Madrid is facing one of its biggest political crises since the end of the Franco dictatorship and the return of democracy four decades ago. It has called the referendum an illegal act and taken police and court action to block it.

The new officers would monitor public spaces, keep order and “act in case the illegal referendum is maintained,” the ministry said in a statement.

Catalonia‘s regional government said new measures including a ban on police time off were over the top and meant to create a false impression of crisis.

“All you need is eyes in your head to see there is no violence,” spokesman Jordi Turull said.

Catalan leaders have said they are determined to hold the vote on Oct. 1, defying the central Madrid government and a Constitutional Court ban. They have also said the Catalan assembly would declare independence within 48 hours of a “yes” vote.

Spanish media have said between 3,000 and 4,000 state officers have already arrived or are on their way, though the interior ministry did not give any numbers.

The reinforcements will join 5,000 state police already based in the region. The ministry said they would back up Catalonia‘s separate police force, called Mossos d’Esquadra, which would remain in charge.

So far the state and local police forces have worked together well, but Spanish government officials say in private the Mossos could do more to block the vote and maintain order.

The Catalan interior minister said the new state forces on the ground were one more step toward taking over the local police, a move that is seen as unlikely by most observers because it would be reminiscent of the 1936-39 Spanish Civil War, when the force was abolished.

“The state is laying the groundwork to take over the Mossos d’Esquadra. It’s a clear attempt to discredit it,” said Joaquim Forn on Twitter.

The Catalan government earlier this week accused the Spanish authorities of effectively taking over its administration after state police raided its offices and arrested officials, and the finance ministry took control of the local finance department.

Authorities have had to billet some of the new officers in three ferries rented by the Spanish government and moored in the harbors of Barcelona and Tarragona because of both a shortage of temporary housing and to avoid clashes between protesters and police forces.