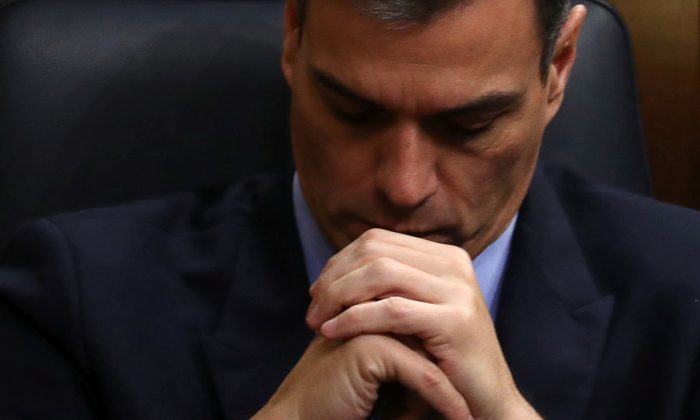 MADRID—Spain’s parliament rejected a draft 2019 budget on Feb. 13 after Catalan separatists turned their backs on the government, pushing the country close to an early national election amid an increasingly fragmented political landscape.

Sources in the government and the Socialist party of Prime Minister Pedro Sanchez told Reuters on Feb. 12 that he would call a snap election if the draft was rejected, with April 14 or April 28 the most likely dates.

An official in Sanchez’s office said that he would make his decision known after he chairs a weekly cabinet meeting on Feb. 15.

The eurozone’s fourth-largest economy, Spain emerged in 2013 from a deep economic slump that slammed the country with crippling levels of unemployment. But it’s been plagued since by growing political volatility, driven by deep divisions over Catalonia’s independence drive and by the emergence of several new parties.

Smiling, but not saying a word, Sanchez left parliament right after losing the budget vote, while opposition parties urged him to call elections immediately.

Conservative People’s Party leader Pablo Casado said the vote, which was 191 against to 158 in favor with one abstention, had been a de facto confidence vote against Sanchez.

“Today, it is clear that we’ve come to the end of the road, that this agony can’t go on any longer, and that Spain needs a better government and it deserves it as soon as possible,” he told reporters.

Political sources said Sanchez wanted an election as soon as possible, to move away from the budget defeat and mobilize left-leaning voters, following a large protest in Madrid against Sanchez’s efforts to ease tensions with Catalan separatists.

Opinion polls in recent weeks have shown that no single party would win enough votes in a general election to rule on its own.