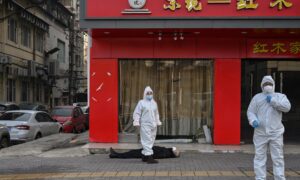 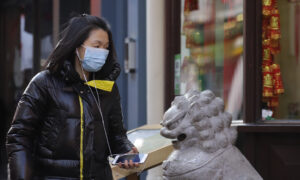 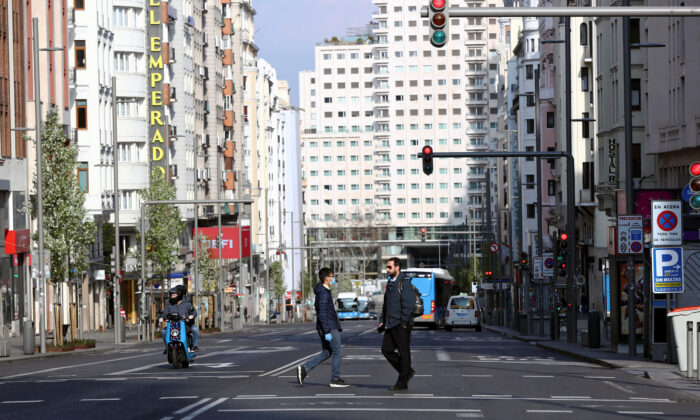 The almost empty Gran Via avenue is seen during partial lockdown, as part of a 15-day state of emergency to combat the coronavirus outbreak in Madrid, Spain, March 15, 2020. (Sergio Perez/Reuters)
Americas

Spain Locks Down Its Citizens, While France Shuts Nightlife

BARCELONA—Spain locked down its 46 million citizens, and France ordered the closing of just about everything the rest of the world loves about it—the Eiffel Tower, the Louvre, the cafes and restaurants—as governments took increasingly desperate measures to put more space between people and contain the coronavirus.

Spain, the second-worst affected European country after Italy, on March 14 ordered its 47 million citizens to stay indoors except for necessary outings such as buying food and medicine. Social gatherings are banned.

Among the high-profile figures to test positive were the prime minister’s wife, two cabinet ministers, and five players of top-flight soccer club Valencia.

The sudden Spanish lockdown, along with similarly abrupt moves to curtail public life in France, have astonished Western Europe this weekend, as countries follow Italy in imposing restrictions unseen in peacetime.

Public places from city streets to beaches across Spain were deserted, with a strengthened presence of police, many wearing latex gloves and face masks, and some using drones to ensure people complied with the emergency measures.

People formed orderly queues outside supermarkets in Madrid on March 15, keeping a distance from each other. A security guard with a face mask let shoppers in two by two.

All that could be heard on the empty streets of Madrid was the sound of families behind shuttered windows. People played video games, watched TV and sat out on balconies.

All major newspapers carried a wrapper emblazoned with a government-promoted slogan “Together we’ll stop this virus.” Newspapers reported that police could issue on-the-spot fines of hundreds of euros for those who failed to follow the rules.

The Ministry of Defense on March 15 deployed its Military Emergencies Units, usually tasked with providing disaster relief, in cities including Madrid, Valencia, Seville, and Las Palmas in Tenerife.

Bars, restaurants, and shops selling non-essential items are shut for 15 days as the country enters a state of emergency. Schools are shut, keeping millions of children at home.

Hairdressers, however, who are allowed to remain open, have urged the government to order them to shut, a move which could help them get economic support, as well as allow them to meet safety rules.

Paris followed other cities in shuttering major tourist attractions, and France announced the closing of all restaurants, cafes, theaters, and nonessential shops starting March 15. France has recorded at least 3,600 infections. It has banned all gatherings of more than 100 people, ordered all schools closed and asked companies to allow workers to stay home.

France pressed ahead with plans for nationwide municipal elections on March 15 but ordered special measures to keep people at a safe distance and to sanitize surfaces.

In Italy, the worst-hit European country, the number of deaths climbed past 1,400, and infections surged roughly 20 percent overnight to more than 21,000. People have been engaging in what authorities characterized as irresponsible behavior—still socializing despite the nationwide lockdown. Many Italian cities, including Rome and Milan, decided to close playgrounds and parks, too.

Premier Giuseppe Conte has said production—particularly of food and health supplies—must not stop. On March 14, union and industrial leaders reached an agreement to keep factories running.

At noon, people around Italy came out on their balconies, terraces, or gardens or leaned out their windows to clap for several minutes in a gesture of thanks to medical workers.

UK Set to Isolate People Over 70

In UK, the death toll nearly doubled from the day before to 21, and the number of people infected rose to over 1,100. Ireland had 90 confirmed cases and one death as of March 13. Greece’s infection total approached 230 with three deaths, and police there arrested 45 shopkeepers March 14 for violating a ban on operations.

Britain will isolate older people “within weeks” and force into quarantine anyone diagnosed with coronavirus, the government said as it stepped up measures that have so far been less stringent than elsewhere in Europe.

The British Heath Secretary Matt Hancock said people aged over 70 would be shielded from the virus by self-isolating for up to four months, with an announcement “in the coming weeks.”

Britain has taken a distinctly different approach to tackling coronavirus from European countries such as Italy, Spain, and France, which have imposed stringent lockdowns to try to slow the spread of the disease.

The European Commission on March 16 will present guidelines on border measures to prevent controls designed to stem the spread of coronavirus from blocking the supply of essential goods and medical staff.

President of the European Commission Ursula von der Leyen, said on March 15 that the 27-member European Union needed to keep goods flowing across Europe without obstacles.

European countries took steps to isolate themselves from their neighbors.

Denmark closed its borders and halted passenger traffic to and from the country. Travelers will be turned away at the border if they are unable to show that they have “a legitimate reason” to enter—for example, if they are Danish citizens or residents.

Poland planned to close is borders at midnight and deny all foreigners entry unless they lived in Poland or had personal ties there. The Czech Republic and Slovakia took similar action. Lithuania said it was introducing border checks at the frontiers with Poland and Latvia.

Russia said its borders with Norway and Poland will be closed to most foreigners beginning March 15.

In the Pacific, New Zealand announced that incoming passengers, including citizens, will be required to isolate themselves for 14 days, with few exceptions.