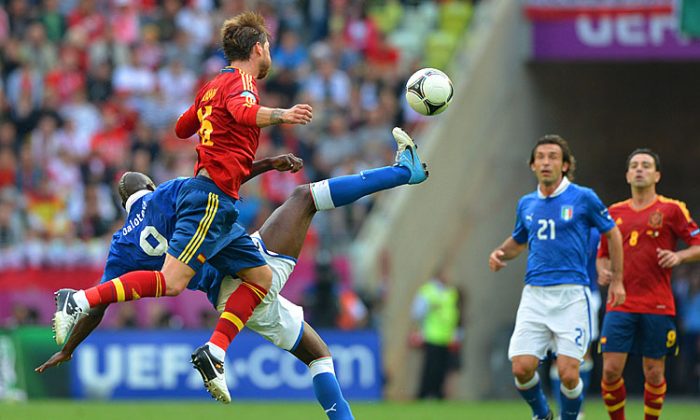 Italy has turned the form book upside down to earn a spirited 1–1 draw with World and European champions Spain in the opening Group C fixture of Euro 2012.

The result put an early dampener on Spanish aspirations to become the first international team in history to win three major tournaments in a row.

A point apiece for the two soccer giants means that Croatia has jumped to the top of the group following a 3–1 triumph over Giovanni Trapattoni’s Republic of Ireland. The Irish will argue that they did not get the rub of the green on the night, with Trapattoni complaining that Everton striker Nikica Jelavic was offside when he netted the second crucial goal for the Croats—not to mention a penalty shout being waved away after Robbie Keane was felled in the box—but the inescapable fact is that Croatia are simply a much superior side technically, while Slavan Bilic prevailed over Trapattoni in the tactical battle of wits. The Croats are many pundits’ pick for an outside bet to go all the way. It will be fascinating to see them cross swords with Spain and Italy who will be able to match them both in technical and tactical ability.

But it was the clash between Spain and Italy, two of the genuine powerhouses of world football, that everyone was talking about. The Italians have had a nightmare build-up to this tournament with the domestic game plagued by scandal and the national team highly unimpressive in three lost warm-up friendly fixtures. There was even talk of Italy withdrawing from the competition altogether in the wake of the match-fixing allegations.

Notwithstanding his highly controversial season in the English Premier League, Manchester City’s mercurial Mario Balotelli was chosen to lead the line for the Italians who opted to play five men across the back, with Daniele De Rossi slotting in as a third central defender-cum-sweeper. Emanuele Giaccherini from title winning Juventus was given his international debut at the age of 27.

Spain was of course without their inspirational skipper Carlos Puyol and top scorer David Villa. Nonetheless, the amount of talent they have to choose from was evidenced by the presence of the two Chelsea Champions League heroes, Juan Mata and Fernando Torres, on the bench.

Perhaps surprisingly, it was Iker Casillas in the Spanish goal who had the first significant work to do. The Real Madrid skipper had to be at full stretch to palm away an Andrea Pirlo free kick after a quarter of an hour. As expected it was the defending champions which dominated possession for long periods, but Italy kept their shape and never looked in danger of being overrun. The short inter-passing of the Spaniards is always a delight to watch, but with De Rossi playing a blinder for Italy at the back, Spain’s attacks were breaking down before Gianluigi Buffon in the Italian goal could be troubled, and it was Casillas that continued to be the busier of the two keepers.

On 34 minutes the peerless Pirlo slid a typically incisive pass to Antonia Cassano who cut inside from the left and forced Casillas into a smart save. Then just prior to the halftime whistle, the Spanish keeper produced an excellent stop from a Thiago Motta header. Despite enjoying 58 percent of possession, Spain’s most threatening moment was when Andres Iniesta shot over the top after being picked out by Xavi on the edge of the box.