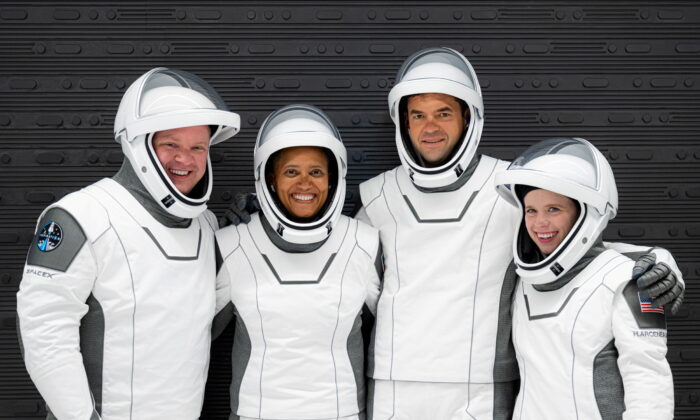 The SpaceX program, based in Hawthorne, Calif., will launch the first-ever all-civilian crew on a three-day mission to space. The flight, called “Inspiration4,” is a part of a fundraising campaign for St. Jude’s Hospital and will be launched from the Kennedy Space Center in Florida.

The mission will be led by Shift4 Payments founder and billionaire Jared Isaacman, who is also a trained pilot.

“Our crew carries the responsibility and importance of this mission as we prepare to blast off,” Isaacman said in a statement sent to The Epoch Times.

“We have been well-prepared for the challenges ahead of us the next three days and look forward to sharing our experience with the world as we continue to bring attention to St. Jude Children’s Research Hospital here on Earth.”

Inspiration4’s other passengers include Hayley Arceneaux, 29, a physician assistant at St. Jude and a pediatric cancer survivor. Arceneaux thought her dream of becoming an astronaut was over when a bone cancer diagnosis caused doctors to remove a femur on her leg at 10 years old, according to the Today Show. At 29, Arceneaux will make history as the youngest person to go to space; she will also be the first person ever to travel to space with a prosthesis.

Chis Sembroski, 42, an Air Force veteran and aerospace data engineer, and Sian Proctor, 51, a pilot and geoscientist will also board Inspiration4. Sembroski’s friend won a seat in a lottery by donating to St. Jude Children’s Research Hospital, and later recommended Sembroski go on the flight instead. Proctor won the contest as a Shift4 customer.

Inspiration4 has a planned orbit of 575 kilometers (357 miles), a SpaceX spokesperson told The Epoch Times. This is the farthest a human spaceflight has traveled since the Hubble [telescope] missions, according to SpaceX. The Dragon space capsule the crew will be traveling in has a three-layer observation dome.

Though civilians, the crew experienced thorough training at the SpaceX Hawthorne base, including G-force training on Mig-29, AlphaJets, and LC-39 aircraft.

Aboard the ship will be several items that will be later auctioned off to raise even more money for St. Jude; those items include artwork by St. Jude patients, a ukulele by Martin Guitar, and a Time Magazine autographed by the crew. The crew will also be bringing their own meaningful personal items aboard; Arceneaux, who lost her father to cancer three years ago, will bring his beloved tie to orbit, as well as pictures of her loved ones.

“I’m bringing some things that represent me, and I’m bringing pictures of friends I lost through the years to cancer because they’re such an important part of why we’re going on this mission raising money for St. Jude’s,” Arceneaux told the Today Show.

The crew will also be gathering research while in orbit. In space, the crew will record ECG activity, movement, sleep, heart rate, and rhythm, blood oxygen saturation, cabin noise, and light intensity data, as well as provide biological samples before, during, and after the mission for research on the impact of space travel on the human body; Researchers will also track cognitive and behavioral tests on crew members.