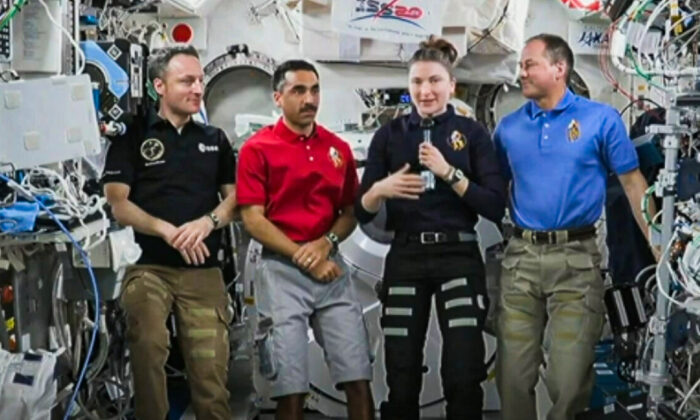 The NASA and SpaceX Crew-3 astronauts answered questions about their time aboard the International Space Station.

“I was a bit surprised to find out how emotional I got when I got to see my crewmates see space for the first time and watch them look out the windows. I suited them up for their first EVAs and how protective I felt and how emotional it was to see them go out the hatch,” Marshburn said of the other three astronauts who are first time fliers on the crew.

The Crew-3 astronauts have been living and working on the station since their launch on Nov. 10, 2021.

During their mission, the crew members contributed to hundreds of experiments and technology demonstrations.

In addition, they tested a handheld bioprinter designed to print bandages made from skin cells directly onto a wound, and a miniature scanning electron microscope.

Crew members also installed a new device to support studies on fire safety in microgravity, and conducted one of the first archaeological experiments in space.

Working in pairs, the astronauts also completed four spacewalks to prepare the station for upcoming solar array upgrades by assembling and installing modification kits and successfully replacing a faulty antenna on the Port-1 truss structure.

“We were super lucky because we all got the chance to do a spacewalk during this mission, and that was kind of a crew goal. We didn’t know if it would work out because of the scheduling, but we had a fantastic time out there doing some amazing work, looking down at our beautiful planet,” Barron said.

The Crew-3’s SpaceX Crew Dragon spacecraft, which they named Endurance, will undock from the space station later this month, splashing down off the coast of Florida to conclude the mission.