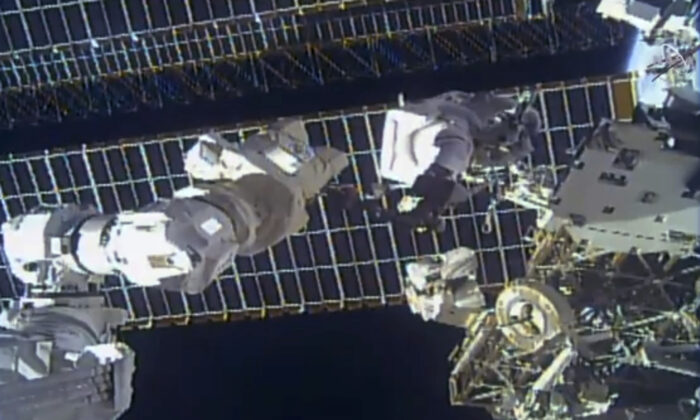 Astronaut Tom Marshburn replaces a broken antenna outside the International Space Station after getting NASA's all-clear for orbiting debris, on Dec. 2, 2021. (NASA via AP)
Space

CAPE CANAVERAL, Fla.—Spacewalking astronauts replaced a broken antenna outside the International Space Station on Thursday after getting NASA’s all-clear for orbiting debris.

U.S. astronauts Tom Marshburn and Kayla Barron were supposed to complete the job Tuesday, but NASA delayed the spacewalk because of potentially threatening space junk. NASA later determined the astronauts were safe to go out, despite a slightly increased risk of a punctured suit from satellite wreckage.

Russia destroyed an old satellite in a missile test nearly three weeks ago, sending pieces everywhere. NASA isn’t saying whether the object of concern was from that event.

During the first National Space Council meeting under Vice President Kamala Harris this week, top U.S. government officials joined her in condemning Russia’s extensive debris-scattering last month. More than 1,700 sizable pieces of the shattered satellite are being tracked, with tens if not hundreds of thousands too small to see.

Barron reported at least 11 small debris strikes to the failed antenna that was removed during the spacewalk, with some of the holes looking old. The device—up there for more than 20 years—malfunctioned in September.

Marshburn, 61, became the oldest person to conduct a spacewalk. It was the fourth of his career. Barron, 34, a space rookie, ventured out on her first. They flew up on SpaceX last month for a six-month stay. Two other Americans are aboard the space station, along with two Russians and one German.